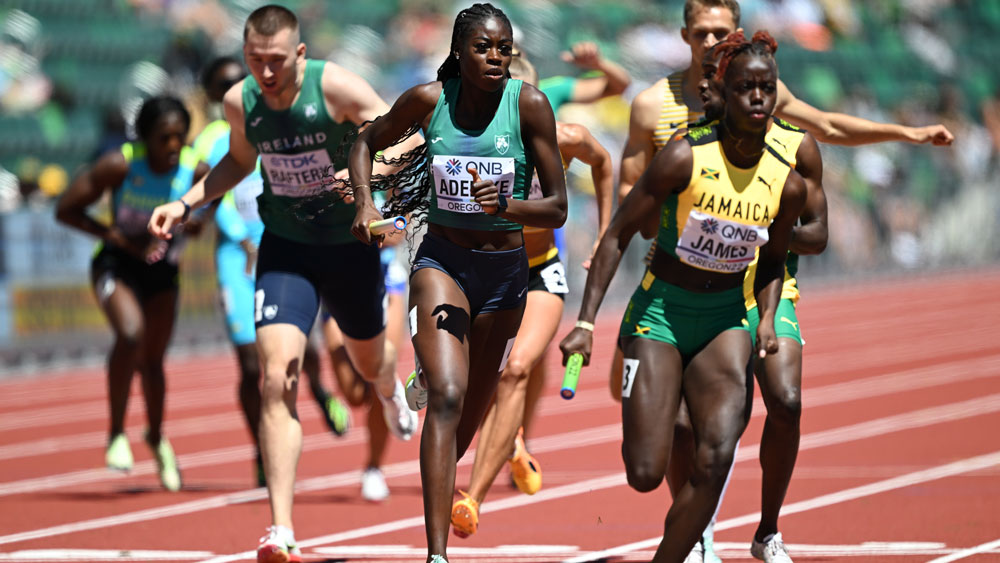 Rhasidat Adeleke after taking the baton from team-mate Jack Raftery whilst competing in the mixed 4x400m relay heats during day one of the World Athletics Championships in Oregon, USA. (Photo: Sam Barnes/Sportsfile)

Adeleke and Raftery in blistering start for Ireland in Oregon

TALLAGHT’S Rhasidat Adeleke and Donore Harriers athlete Jack Raftery played their part as Team Ireland made it all the way to the Mixed 4x400m Relay final at the World Championships in Oregon.

Illness unfortunately ruled Adeleke out of competing in the decider – Sharlene Mawdsley taking her place – but the former Presentation Community College, Terenure student had showcased her undoubted ability in a superb heat performance from the Irish on Friday.

Joining forces with Sophie Becker and Christopher O’Donnell (survivors from the team that reached last year’s Olympic final in the same category), Raftery and Adeleke shone as Ireland finished second to the Dominican Republic – who went on to earn gold in the final itself in the early hours of Saturday morning Irish time.

It was the experienced duo of O’Donnell and Becker that were tasked with leading the Irish charge in the heat, before Raftery took over as the third runner on show.

Despite not making the best of starts, Raftery proceeded to run the fastest third leg of anyone in the field in a time of 45.37. Ireland found themselves in fourth spot when he handed the baton to Adeleke, but the Tallaght AC club star made the very most of her spell on the track.

Faced down by two-time World Championship medallist Tiffany Jones, she burst ahead of the Jamaican and earned Ireland second place with an impressive time of 49.80.

Although there was obvious disappointment for Adeleke to be missing out on competing in the final of a major event, it is hoped she will be able to return to individual action later in the week.

As it transpired, Ireland ultimately finished eighth in the relay decider (which took place on Friday evening in the US state) in a respectable time of 3:16.86.

The earlier heat has taken its toll on them to some degree – and the late change to their team probably didn’t help matters either – but the fact that Ireland are now consistently reaching mixed relay finals in major tournaments is indicative of the strides being made in athletics across the nation.