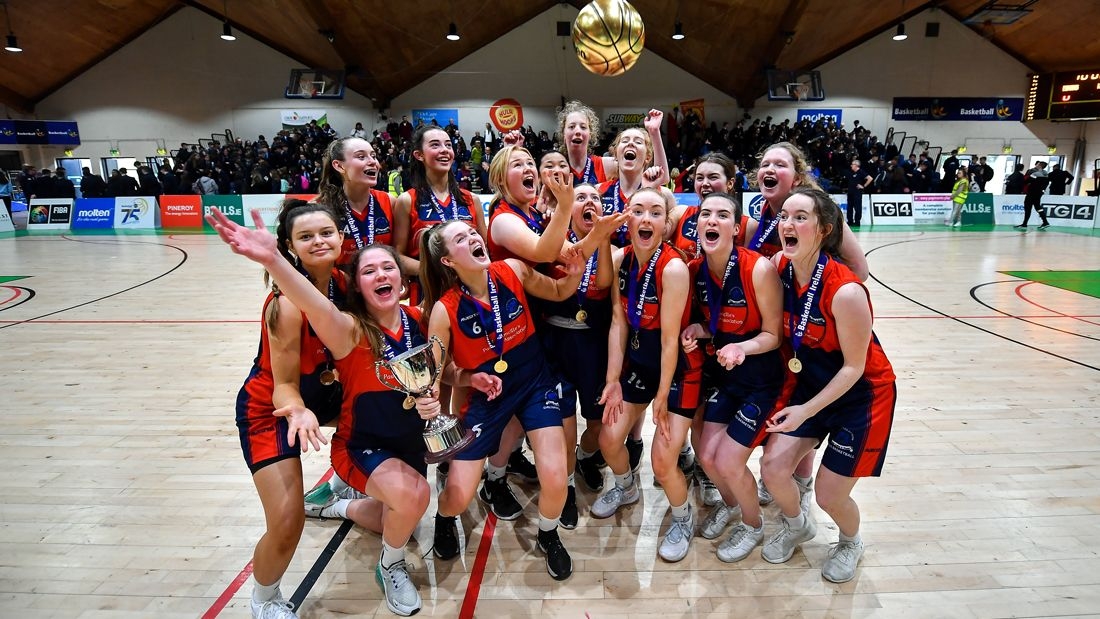 ST COLMCILLE’S CS Knocklyon were crowned All-Ireland Under 19B Girls Schools Basketball Cup champions at the National Basketball Arena this afternoon as they put in a superb display to win out 59-40 against St Patrick’s Academy, Dungannon.

Colmcille’s were inspired by two standout performances from MVP Hannah Byrne, who finished the game with 26 points, and fellow guard, Emma Mullins who carded a huge 23-point haul on the day.

A big first half from the Dublin school helped see them build up a solid lead that St Patrick’s struggled to whittle down, as they went in at half time 36-23 to the good before widening the gap to 50-31 by the end of the third.

An extremely close first quarter saw nothing separating the sides early on. Hannah Byrne and Emma Mullins dominated the scoring for St Colmcille’s, with Mullins knocking down a big three pointer and a nice jump shot early on.

At the other end, it was Bronagh Barker and Abigail Rafferty who led the charge, with Rafferty bagging seven points in the quarter while a nice score from Laura Canning helped draw the sides level as the clock wound down towards the end of the period.

A free throw from Mullins followed by a big three-pointer from the talented St Colmcille’s player though edged them into the lead just before the buzzer, 17-13.

Momentum stayed with the Dublin school in the second quarter, with Byrne and Mullins controlling the offense. A big quarter from Byrne saw her scoop 11 points for her team to push them out into a bigger lead, and despite good scoring from Rafferty, Canning and Ellen McKiernan at the other end, it was St Colmcille’s who held the lead at half time, 36-23.

The Knocklyon side led the way in the third quarter once more, despite superb work from Rafferty, Barker, Canning and Claire Pinkerton for St Patrick’s Academy.

Indeed a big defensive display from the Dublin school saw them make St Patrick’s work extremely hard for every score, while Mullins, Abby Steacy and Byrne added some big scores at the other end.

Good work from Claire Davitt enlarged the gap even further and despite McKernan and Rafferty’s best efforts for St Patrick’s, Colmcille’s led 50-31 heading into the last.

St Patrick’s put in a huge effort in the fourth quarter though, and by the midway point had started to claw back the deficit with super scoring from Rafferty, Bronagh Barker and Pinkerton.

It was neck-in-neck throughout, as the sides matched each other score for score, with Mullins and Byrne to the fore for Colmcille’s once more.

Despite keeping up with the Dublin school throughout that period, and matching them 9-9 on the scoreboard, the damage had already been done, and Colmcille’s ran out winners.