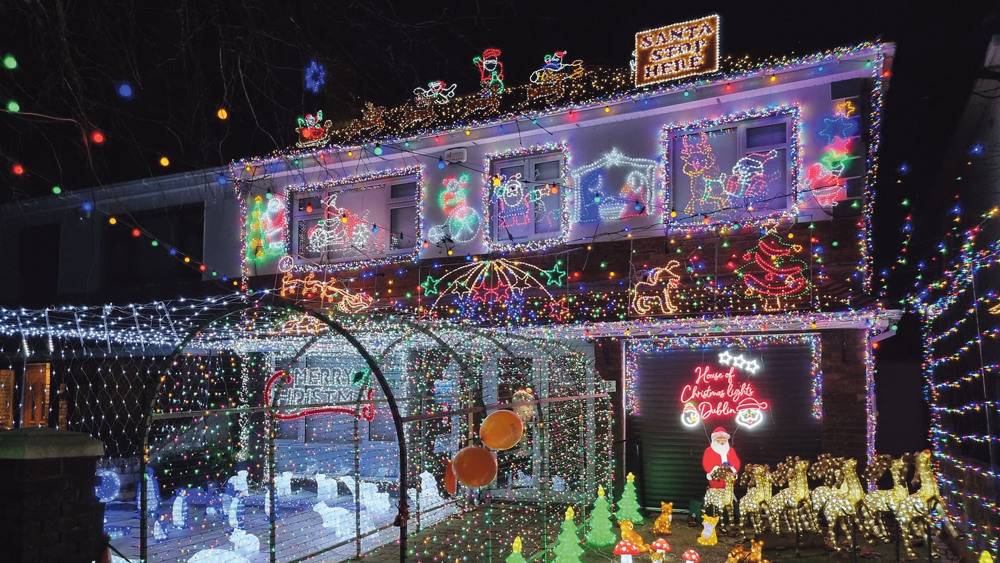 LIGHTS, ACTION: House is decorated to raise money for charities

All is merry and bright at the Christmas House of Lights

A LUCAN house is truly merry and bright this Christmas after being decorated with over 80 sets of Christmas lights in aid of the mental health charity Jigsaw.

Suitably named ‘The Christmas House of Lights’, the house is located at Weston Crescent, Weston Park in Lucan. It is hard to miss as it has been kitted out all for a good cause this Christmas.

Owner Phil Corcoran, along with his partner Paddy Toner, have been decorating his house to raise money for various charities since 2016, raising an incredible €60,000 in the last five years.

“We stuck with Temple Street for the first five years and then this year we thought more than ever it was important to raise money for a mental health charity and it suited us to go with Jigsaw.”

With most people putting up their Christmas lights nearing December, Phil says the hard work started in September, with over 80 sets of lights and over 100 figures in the garden and on the house itself.

“There are at least 50 or 60 thousand bulbs,” said Phil. “We turned them all on Friday, November 26, the same day as The Late Late Toy Show. We had our switch-on night for the estate and we had goodie bags with Christmas sweets, chocolates hot chocolate and marshmallows.

“It has been quiet enough so far, but we hope to have more people visiting this weekend.”

If you would like to go and see the lights and wish to donate to Jigsaw, there is a collection box at the house as well as a QR code you can scan which will bring you to a donation page.

You can also donate through the website at www.houseofchristmaslightsdublin.com