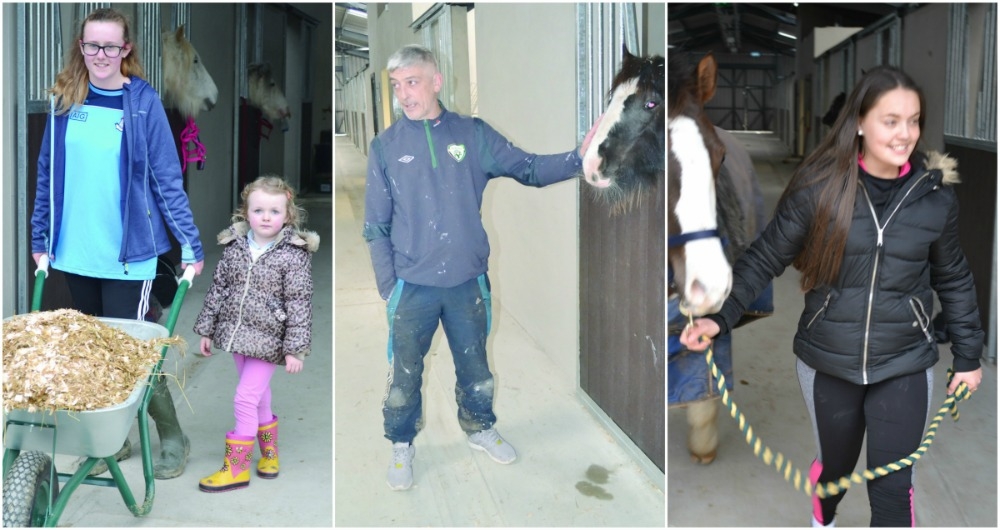 HORSE welfare in Clondalkin took a major gallop forward this week, with the official opening of the Clondalkin Equine Club.

Plans for the project have been four years in the making – starting out when a group of local horse owners got sick of seeing equine abuse in the wider community.

Work on the Ballyowen Park facility was funded with €500k by the Department of Agriculture and €50k by South Dublin County Council.

The new centre, which will host up to 20 stables and educate youths on equine care and welfare, was officially opened yesterday by Agriculture Minister Michael Creed and South Dublin County Mayor Gus O’Connell.

Derek Denton, Chairman of Clondalkin Equine Club, which was formed in 2012, said the centre already has 10 horses in stables and members have been working flat out to advance equine care in the wider community.

He said: “We have been busy working alongside other groups in Ballyfermot and Limerick. The Limerick group got back up and running once the Clondalkin development started. It has been really busy, but I enjoy it and it makes the kids happy.”

Mr Denton says education services at the centre can act as a stepping stone for members to pursue a career in the equine industry.

Just one of the residents of the new Equine Centre in Clondalkin. Locals have been fighting for the facility for a number of years pic.twitter.com/7IWCpGmA0F

People Before Profit TD Gino Kenny, a long-time campaigner for the establishment of a local equine club, welcomed the development.

Deputy Kenny said: “ This is truly a great day not only for the Clondalkin Equine Club but for the community. Individual members of the club went above and well beyond in making this a reality. It will give young horse owners a place of their own to stable and mind their horses in a safe environment. It’s a good equine story for a change.

“It also promotes good equine educational practice. The multi-agency involvement in this project has been key. The input by SDCC in terms of resources and commitment has been significant over the past number of years.

“I would also like to mention Michelle Kearns, a community worker based in Bawnogue for the Dolcan Project. Michelle’s absolute dedication and guidance was immeasurable over the past four years.”

“Like the club I have dedicated an enormous amount of time over the past eight years in trying to make this a reality.

“Through lobbying the council and championing the cause of responsible urban horse ownership, a social horse project in Clondalkin has now been realised. This is the end of a lifetime fulfilment, but the beginning of a lifetime of enjoyment for many people.”

NEWER POSTThere was a lot of love for the final episode of ‘This is Jobstown’
OLDER POSTDr Jim Gray: “I cannot guarantee their care or dignity, which is a very serious thing to say as a clinician”