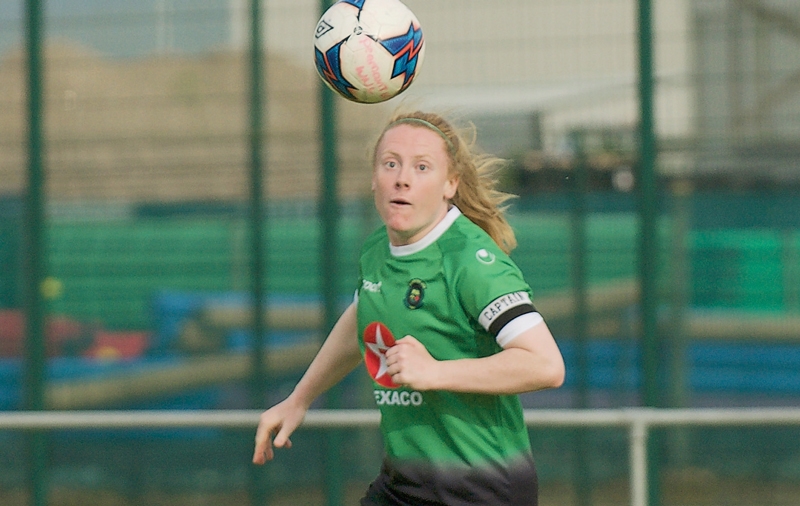 IT WAS a rout at Greenogue on Saturday as Peamount United striker Amber Barrett signed off on her spell with the Newcastle club with a hat-trick in a 9-0 win over Kilkenny City that keeps them eight points clear at the top of the Women’s National League.

The 23-year-old is starting a new chapter in her career next week in Germany after having put pen to paper for a move to Bundesliga side Koln.

Peamount Utd Manager James O’Callaghan named Barrett captain for the game and it took her just three minutes to ignite her goal scoring spree when a right wing cross from Megan Smyth Lynch fell to the Donegal native who struck home from inside the box.

Eleanor Ryan Doyle doubled the leaders’ lead when she headed home a Jade Reddy cross, while Smyth Lynch made it 3-0 with a superb shot from distance leaving Kilkenny City goalkeeper with no chance.

O’Gorman put the Peas 4-0 up when she tapped the ball into an empty net before Niamh Farrelly became the fifth person to get on the scoresheet when she found the bottom corner.

Barrett scored her second and Peamount’s sixth with a long-range effort three minutes before the break and O’Gorman made it 7-0 on the stroke of half time with a bicycle kick from close range.

After the break Peamount took their foot of the gas and it was not until the final 15 minutes that Barrett completed her hat-trick as she whipped a ball into the top corner, moments later O’Gorman followed suit to secure her hat-trick and finish the game at 9-0.

Peamount now sit on top of the table on 36 points with 12 wins out of 12. With nine games left, they stand eight points ahead of Wexford Youths and ten clear of Shelbourne who still have a game in hand.

However the league stands, Saturday’s game was all about Barrett, the departing Republic of Ireland international scored 16 goals for the Newcastle side this season but it does not leave her in contention with the golden boot.

NEWER POST“We know what we have to do” – Finn urging Hoops
OLDER POSTAphasia can be life-changing, but supports available can make life easier