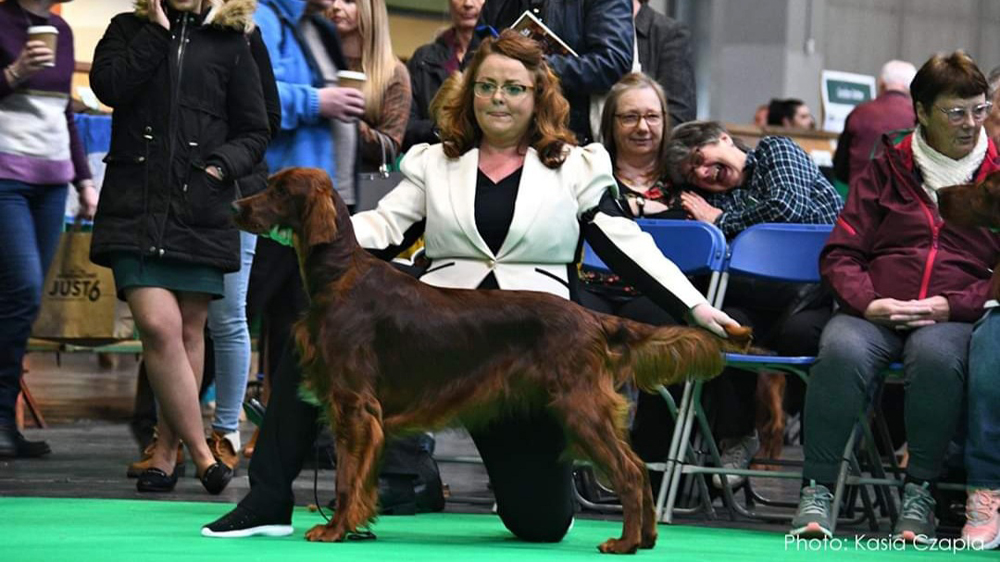 A LOCAL dog groomer and her Irish red setter are set to compete at ‘the world’s greatest dog show’ after qualifying for Crufts 2022.

Angela Breslin, who owns PoshPaws dog groomers in Rathcoole, will travel to Crufts in March 2022 after qualifying in the Belfast show with her Irish setter, Seoidín, last weekend.

Seoidín, who’s name means ‘little gem’ in Irish, was bought by Angela as a present to herself for her 40th birthday two years ago.

“I bought him as a show dog and trained him and managed him through different shows and qualifications and Crufts was always the main goal,” Angela told The Echo.

Speaking about Seoidín’s training to qualify for Crufts, Angela explained: “It is basically ring craft and handling. He gets trained every day, and it all comes from his fitness, diet, coat management and temperament.

“In ring craft he has to be standing correctly and moving correctly. It is all a points-based system to get them to a breed standard, which is what is agreed globally as the perfect example of that specific breed and the idea of it is to protect breeds.

“There is a lot of Crufts breeding at the moment with cockapoos and stuff like that, so this is the opposite of that – it is to keep the breeds as pure as possible,” explained Angela.

As part of the competition, the dogs must be fit to perform the jobs for which they were originally bred. Seoidín is a gun dog – which is a dog trained to retrieve game for a gamekeeper or the members of a shoot and must remain lean and have muscle in certain places.

“It is kind of a balancing act between making sure that he is running up mountains but also not tangling his coat, so every time I bring him out, he has to be washed, conditioned and blow dried afterwards,” said Angela.

“Where my passion comes from is coat maintenance and as a groomer, I am always trying to get dogs up to a certain standard. I am always talking about coat care, nutrition and food because a good coat comes from the right care and grooming.”

Rathcoole Community Centre have facilitated Angela and Seoidín throughout their training for Crufts by allowing them to train at the centre before it opens in the morning.

“Before anybody gets up at 7am they allow me into Rathcoole Community Centre and the idea behind that is because it gets him used to a centre. You can train in your garden or a car park, but when he goes to a show it is that floor that they have in the community centre.

“All your training could go out the window if he is not used to a particular floor in the arena. It was brilliant that they could facilitate us.”

NEWER POSTNature on our doorsteps: Sleeping away the winter chill
OLDER POSTMan (24) who beat up his former partner will serve extra 20 months