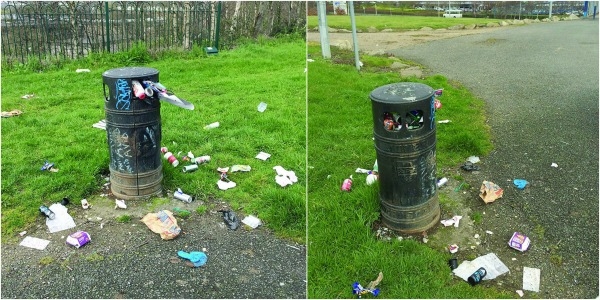 THE dumping of domestic waste in Sean Walsh Park is blocking up bins and causing them to overflow, South Dublin County Council has said, reports Mary Dennehy.

Angry residents contacted The Echo this week to report overflowing bins in their local park, which they claim are contributing to high levels of litter in the area.

However, when contacted by The Echo this week, Leo Magee, Senior Engineer with the council’s Environment, Water and Climate Change Department, said people using public bins for domestic waste is causing the overflow.

Mr Magee said: “A number of bins in the park are being used to dispose of domestic waste illegally and this has the result of causing those bins to block up and overflow when additional litter is placed in them.

“The council is currently considering methods of overcoming this problem, including the use of an alternative type of bin.

Also, if the issue of illegal disposal of household waste in the bin can be addressed then it is likely that this litter problem would no longer exist.”

The council confirmed that there are around 20 litter bins in Sean Walsh park, which are emptied by local authority staff on a daily basis.