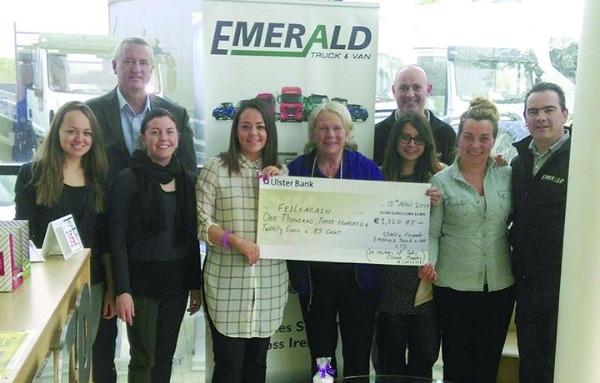 ­­­A MOTHER whose baby was stillborn at 38 weeks has been fundraising in memory of her son and in aid of the Stillbirth and Neonatal Death Association of Ireland, Féileacáin.

Sinéad Doyle from Perrystown and her partner Mick Murphy from Drimnagh welcomed their son Conor Michael Murphy last August, and received support from Féileacáin during the tragic time in their lives.

Since Conor’s birth, Sinéad has been fundraising in aid of Féileacáin and recently held a “Coffee for Conor” morning in Emerald Truck and Van in Greenogue Business Park, where she works.

Following Coffee for Conor, Sinéad spoke to The Echo about her fundraising for Féileacáin and her son Conor.

She said: “It was a complete shock when it happened. It was horrific. People tell you that you’re fine once you pass 12 weeks, but I’ve met several mothers since whose baby was stillborn at the same time.

“It turned our world upside down. If it wasn’t for our son Liam, who is two years old, I don’t know how we could have kept going. It’s devastating.

“Liam knows about his brother Conor and he blows kisses to the pictures we have of Conor every night before bed.
“I would have never known of Féileacáin before. When I went into the hospital to have Conor, the bereavement nurse showed me a box that was on the bed.

“It was from the charity, and it had Conor’s hand and foot prints, his measurements. Two teddies, one for us and one for Conor and a picture of the three of us.

“We’ll treasure it forever. It included things I wouldn’t have even thought of, like a lock of Conor’s hair. These are the only things we have of Conor.

“I found out that these memory boxes are donated into hospitals by Féileacáin. Féileacáin is a group of mothers who have all gone through this.

“I’ve been fundraising for them to keep my mind busy. They really are just brilliant. It could happen to anyone, and everyone has different stories and paths.”

Sinéad will continue to hold fundraising events in aid of Féileacáin in the coming months, with a fundraising night at the Lissadel United reunion party in The Gate Bar, Crumlin on May 6 and a #RunForConor group taking part in the VHI Women’s Mini Marathon on June 6.