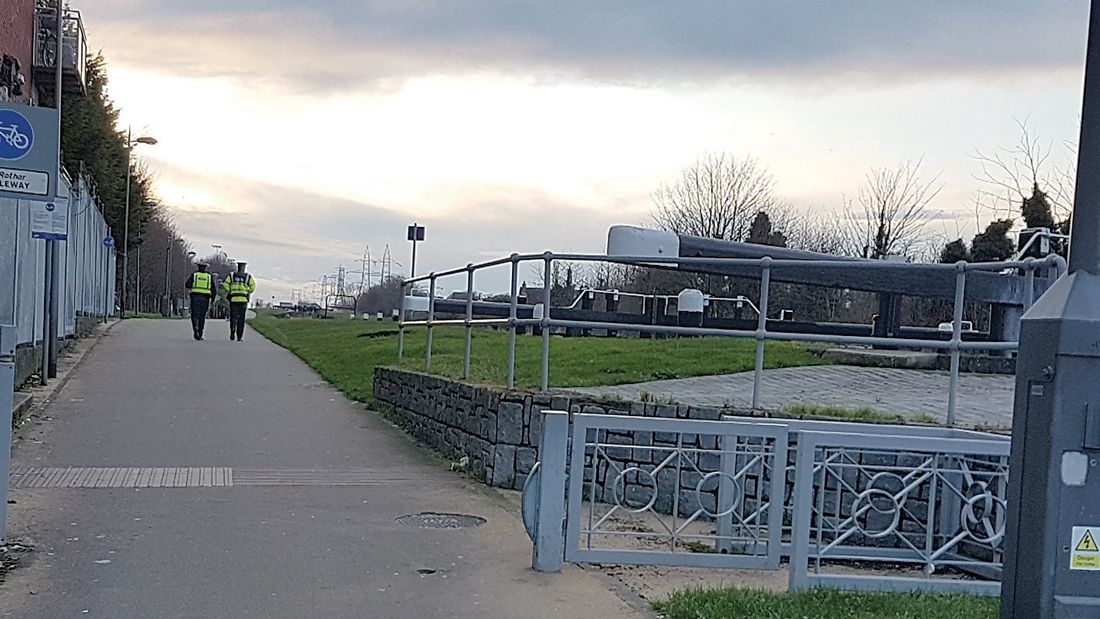 POTENTIAL racist attacks on cyclists using the Grand Canal, are being investigated by authorities.

The move follows numerous serious incidents along the canal which The Echo have covered in recent months, with cyclists attacked by gangs of youths, and in some cases, hit with iron bars over the head and their bikes stolen.

Gardai patrolling the cycleway along the canal on Monday evening (Image: Maurice Garvey)

The bulk of the anti-social activity is taking place in Inchicore and Bluebell, near the Blackhorse Luas stop, and sporadically in parts of Ballyfermot and Clondalkin.

Yaman Umuroglu, a researcher at Citywest company Xilinx, was beaten up and his e-bike stolen by a mob in December, and will not use the canal again to travel home to Kilmainham.

“I’m considering using the canal during the morning rush hour but not in the evenings,” said Yaman, a Turkish native.

“For me to reconsider using it on the way back from work, I’d want to see garda patrols all along the cycleway during the evening rush hour as well. They told me they are patrolling the canal more actively at least until the end of January, but that this may be extended.”

Organised crime along the canal, has been the subject of an ongoing garda operation, which also involves local authorities, and new ‘vandal proof’ CCTV cameras sourced from the UK.

Waterways Ireland have agreed to expand a squeeze gate in Bluebell, that was being used as an ambush location on cyclists, including Yaman.

The gate was installed to prevent scramblers, cars and horses, but this has not worked.

The Echo visited the gate hotspot on Monday between 4.30pm to 6pm, and all of the cyclists who talked, were aware of the problems, albeit many had not experienced violence personally.

“It happens to me once or twice a year,” said Polish native Michal Dabski, who commutes from work in Dublin 8 to Clondalkin every day, and has used the canal since 2015.

“A few times I have had rocks thrown at me, they also tried to grab my bike. I had to get a camera for safety. If I see a gang ahead, I will avoid them and go back onto the Naas Road, but that is not a nice place for cyclists. It is a good idea if cyclists can travel close together on the canal.”

A female cyclist said she stopped using the canal for a while after witnessing a horrifying attack.

“Last year, they were attacking a Polish guy and trying to take him off his bike. I managed to get by but didn’t use it for three months.”

Sadly, another cyclist has accepted the reality of running the gauntlet.

“I have only been attacked three times in five years, so it is not too bad,” said the man, a foreign national, who did not want to give his name.

“The gate is difficult to get through, especially if you have a side bag attached. It is very unfortunate, because the canal is such a nice facility.”

Camera footage sent to The Echo shows cyclists sharing the canal footpath with cars, horses and occasionally, an intimidating group of lads.

Speaking at the recent South Central area meeting, Sinn Féin Councillor Críona Ní Dhálaigh called for something “concrete” the city council can do.

“The increase of anti-social behavior along the Luas lines and Inchicore, and Rialto. I know for a fact the communities around there are sick of it, particularly the racial assaults,” she said.

Dublin City Council area Manager Mary Taylor said: “The Luas line, both our housing managers and area managers have been working very closely with gardai in relation to identifying the individuals involved in that and taking follow up action.

“I think there is a particular concern in relation to the racist aspect of a lot of the attacks, and that is something that is going to need a community response, so we are open in how we go about that.”

For Yaman and other cyclists, the knowledge that offending youths are more brazen, is a major concern.

“Another serious issue is that these kids get caught, put in front of the juvenile court and just released again. This undermines the effectiveness of gardai quite significantly, since it gives the impression to these kids that they can get away with anything without consequences.”