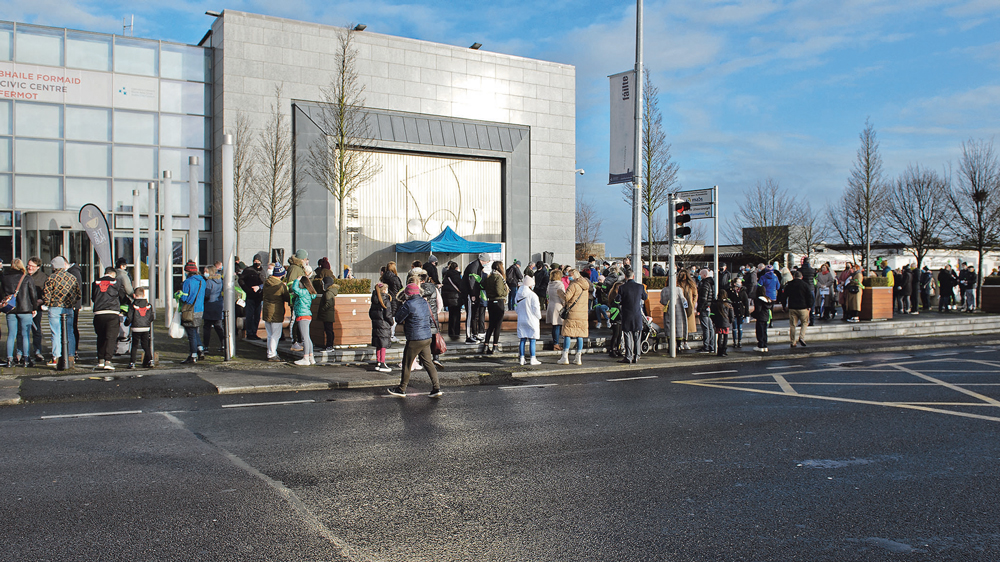 Hundreds of people turned up to support the vigil in Ballyfermot

THE community has come together in an “overwhelming” show of solidarity for the victims of a serious assault, holding a vigil and with a GoFundMe raising over €92,000 to support their recovery.

Hundreds of locals from the surrounding communities wore green ribbons, displayed placards and stood in solidarity with the victims along both sides of the road outside Ballyfermot Civic Centre last weekend.

The vigil was organised with the news two teens had sustained life-altering injuries in an assault.

One of  the victims of the brutal attack was left with a ruptured eyeball along with orbital fractures, broken teeth and large gash below her eye.

She was taken to St James’s Hospital to be treated for her injuries.

The 17-year-old was hospitalised for a number of days, with her family fearing that she may lose sight to the eye that was badly damaged.

In a post on Instagram, she said she had tried to maintain a “positive attitude” but was finding it hard to accept “there is an over 90 per cent chance that I won’t be able to see out of my right eye again”.

A young man also suffered stab wounds to his arm during the attack.

As previously reported in The Echo, the assault happened on the Ballyfermot Road at around 9.30pm on Thursday night, December 30.

Two men were arrested by Gardai in Ballyfermot and Clondalkin on January 6 and charged them in respect of the serious assault before they appeared in the Criminal Courts of Justice a day later.

“The recent attack that took place in Ballyfermot was ferocious in its level of violence,” Cllr Daithí Doolan said.

“But the outpouring of support for both families has been overwhelming.

“Today’s sea of green ribbons was a massive show of support for both families.

“It also sent out a very clear message. Our young people must feel safe to walk our streets, day or night.

“We cannot allow a very small group of individuals to hold our community to ransom. We will not allow this to happen. Our young people deserve better.

“Today’s event must be the turning point in how young people, in particular how young women, are viewed and treated by others.”

The female victim has since been released from hospital after getting surgery on her eye.

Although, she now faces another surgery on her eye as well as other operations to repair damage to her cheek bones and eye socket.

Following an appointment in St James’ Hospital this week, her mother provided an update through the GoFundMe page.

“The Dr explained that our eye sockets are like a square shape and that basically 2 sides of that square for [her] had been shattered and that reconstruction will be needed,” she explained.

“They explained they will be using bone from her hip to do the repair, unfortunately they can’t at this time say when that repair will take place as they will need to consult with the Eye and Ear to see what their plans are for [her] eyeball.

“She has a fracture in her cheek bone and may need a titanium plate in her cheek but we need to wait till Thursday until the swelling has gone down more to confirm.

“There is some damage to her sinuses on the right side also.”

The female victim’s parents are looking into specialist help for the procedures, with the money raised through GoFundMe giving them the option to do so.

At the time of going to print, on Wednesday afternoon, the fundraiser had accumulated €92,628 in donations.