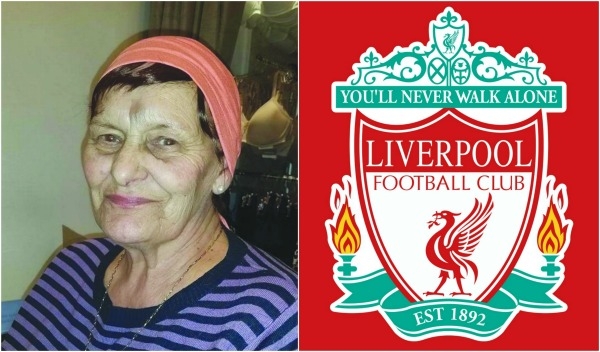 A FAMILY have started a campaign to grant their mother – suffering from a fatal illness – her dream of seeing her beloved Liverpool FC in Anfield for the first time.

Marie Wright, from Cleggan Road in Ballyfermot, was diagnosed with lung cancer in February, and initially given weeks to live.

Undergoing chemotherapy and radiation treatment, Marie has been fighting the good fight for seven months, inspiring others to match her strength.

Two of Marie’s six kids, Janice and Ray, set up a Facebook page ‘Marie’s Wish’ on Sunday and have been overwhelmed with support – the page reaching thousands of people within 24 hours.

The pair said they originally set up the appeal to give something back to Marie, who they describe fondly as a “typical Ballyfermot mother.”

“We’ve been amazed at the support,” said Janice.

“Our mam has been great about all this. It’s not been easy on the family, but she is the one keeping us all going. She is a salt-of-the-earth mother, who has given us everything in life. Our family’s rock and core.”

Despite her ordeal, Marie, a grandmother of 14, was in her usual feisty and chatty form, when The Echo spoke to her on Tuesday evening.

“You have to keep going,” said Marie. “If this helps someone else to follow their dreams, then it will be for a good cause.”

An avid Pool fan, Marie lists some of her favourite players down throughout the years, including Kenny Daglish, player and manager of the great late 1970/80s side.

“When the football is on, that’s it, I’m watching,” said Marie. “The husband can watch his ‘donkeys’ (horse racing) somewhere else.”

Marie also has a place in her heart for Stephen Gerard, Adam Lallana, her current “crush” Liverpool manager Jurgen Klopp.

The response for Marie to meet Liverppol players at Anfield has been extremely positive in the community – residents resolving to make sure the feisty grandmother will never walk alone.

As we went to press, The Echo understands that the family didn’t get great news from the hospital. Under instructions from her doctor they were advised to move her trip to Anfield forward. She will now hope to go on September 10 when Liverpool play Leicester.