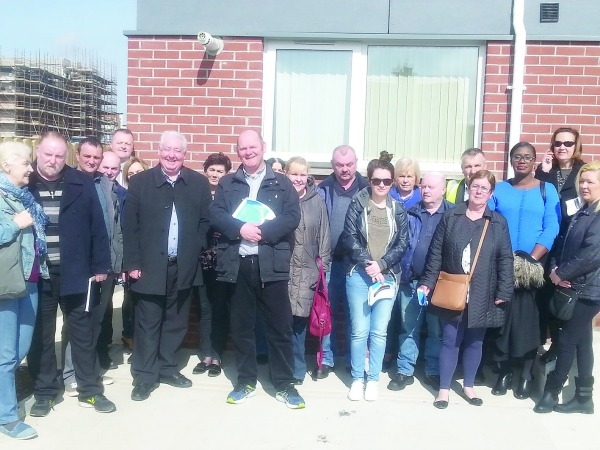 RESIDENTS from Ballyfermot visited the pilot modular housing scheme in Ballymun this week – in an effort by Dublin City Council to alleviate concerns surrounding proposals for modular homes south of the Liffey, reports Maurice Garvey.

Up to 24 modular homes are planned for an open green space at the junction of Cherry Orchard Avenue/ Drive, with a further 29 modular homes to be located in Mourne Road, Crumlin.

Councillors have expressed alarm at the €190,000 cost for each home, which will be rented on a 31-year lease.

Sinn Féin Councillor Daithí Doolan accompanied residents on the bus trip from Ballyfermot to Ballymun, and hailed it as a “productive visit.”

Cllr Doolan said: “It gave residents a chance to see at first hand rapid build housing. People can now make their own minds up rather than believe some of the negative hype in the media. These homes are top quality, they meet all the building and environmental regulations.

“It is unacceptable that 100’s of families, many from Ballyfermot are forced to lived in overcrowded conditions in hotel rooms and B&B’s. Modular housing provides an opportunity for these families to move on with their lives until they can find more permanent housing.”

Doolan says there is “enough zoned land in Dublin City to build 52,600 residential units”, and has called for capital funding to be released and for private developer “stop hoarding land.”