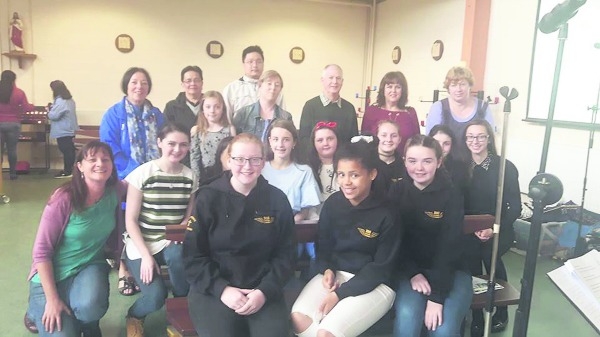 Ballyfermot singing to the world on radio

MASS in Cherry Orchard could be heard around the world last week, courtesy of a live broadcast by RTÉ Radio 1.

RTÉ Radio 1 air a live Mass in Ireland every week, and chose the Church of the Most Holy Sacrament in Cherry Orchard for the programme on Sunday.

Mass at 11am was celebrated by Fr Michael Murtagh, with liturgical music by the Cherry Orchard Choir and the D10 Gospel Choir.

“It was the first time Cherry Orchard was picked for the programme,” said Fr Murtagh.

“It was lovely to welcome people from all over the world. Only this morning, I received a call from someone in Northampton, asking if that was me on the radio, and I said, yes it was.

“We would be open to taking part in the programme again. This is a relatively new and young parish, which has become a diverse parish.”

Suzanne Greene, chair of the Parish Council, gave a brief history and introduction to the parish at the beginning of the Live Radio Mass yesterday.

Meanwhile, it was doggy heaven for a number of canines in the parish on Saturday, as the church hosted an animal blessing.
The animal blessing was held to mark the anniversary of St Francis of Assisi, the patron saint of animals.

Sulkies were most welcome at the service, but it was predominately attended by dog owners.

Residents can listen back to the Cherry Orchard Mass on the RTÉ player at www.rte.ie/radio1/mass.