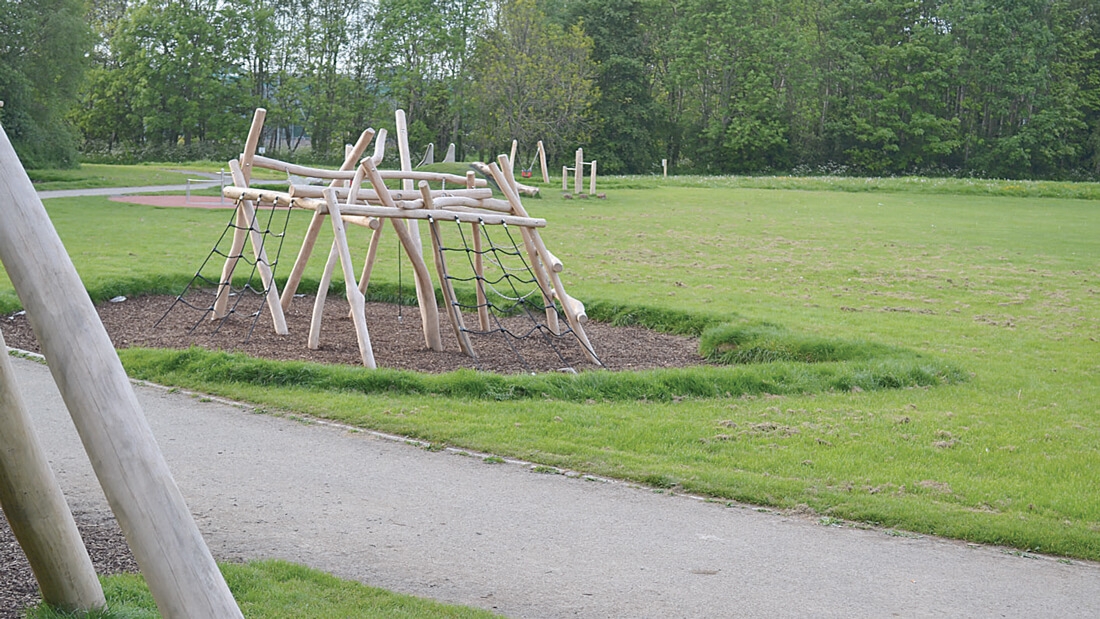 THE new €50k playspace in Bancroft Park was officially opened this week, ahead of plans for the introduction of a water play area in Corkagh Park and major works at Dodder Valley Park.

The Bancroft Park playground has been delivered as part of South Dublin County Council’s five-year Playspace Programme, and includes swings, a slide, some natural play features, a climbing frame, a roundabout and a double zipline.

The new playspace in Bancroft Park

According to the council, the equipment in the playspace, which cost around €50k, is made from Robinia timber with woodchip surfacing to fit into the parkland setting.

The play equipment is also spread out to increase activity levels for children aged between two and 12 years.

Corkagh Park is also set for a major refurbishment later this year, with the unique design, according to the council, including a “major water play area more typical of the large European playgrounds and a complete retrofit of equipment”.

Major works are also planned for Dodder Valley Park, with consultations expected to start in the coming weeks.

Speaking about the Playspace Programme, a Council spokesperson said: “The innovative programme is based on encouraging imaginative, constructive and social play.

“They provide a space and a setting for play, rather than just equipment for children to play with and they are located where children live.

“A reduction in children’s contact with nature has also been recognised as a factor in the deterioration of children’s physical and mental health.

“The new playspaces emphasise contact with nature and natural materials.”

According to the council, a key feature of the Playspace Programme has been inclusivity.

“A huge amount of work was done on ensuring that our play areas are autism friendly and have facilities for children with reduced mobility,” the Council said.

“Natural play is very important for children with sensory issues, as well as encouraging imaginative play and adventure in all children.”

At the official opening of the Bancroft Park playspace this week, Deputy Mayor Cathal King thanked the local community for its support of the playground and the council staff in managing the project and maintaining it.