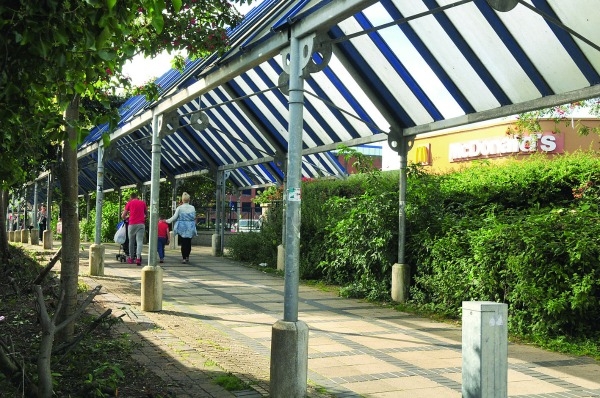 Belgard walkway to get new lighting and revamp

DUE to ongoing maintenance issues at the Belgard walkway, South Dublin County Council is removing the canopy and totally refurbishing the access route – and will include a new public lighting scheme.

Over the years, residents have lodged complaints over the condition of the walkway, which included issues around overgrown shrubbery, litter and dumping, lack of lighting and the condition of the canopy – which, proving difficult to clean, is loaded with dirt and mould and missing panes.

According to the council: “Due to ongoing maintenance issues at this location, it is proposed to completely refurbish the paving, remove the existing shrubbery and install a public lighting scheme along this walkway between Belgard Road and Belgard Square East.

“The design will reflect the materials used at The Zip between The Square and Tallaght IT.

“In addition, the canopy will be removed, since it has the potential to become increasingly hazardous and is currently a health and safety issue with many complaints being received from members of the public.”

The council, which plans to remove all landscaping from the walkway bar the trees, will also review traffic signals in the area, resurface the footpath at the entrance to the walkway on the Belgard Road and replace pedestrian railings, benches and litter bins.

Tallaght South Sinn Féin councillor Dermot Richardson told The Echo: “This is really good news and will revamp the look of the whole area.

“This is a really busy walkway and is used at all times of the day and night and now, thanks to the revamp, it will be more open, with better LED lighting making it safer for everyone.”
The council hopes to start work in spring 2017.