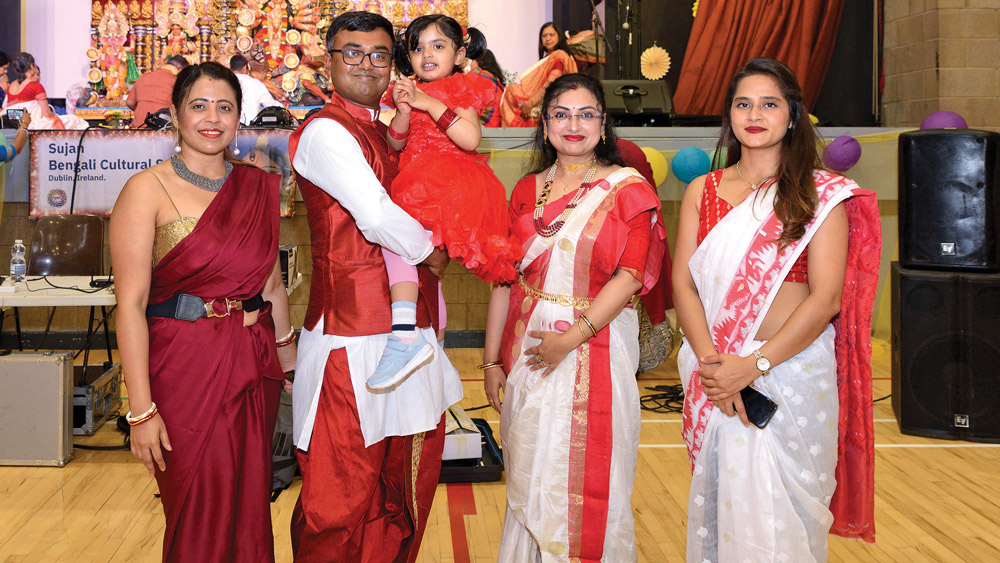 OVER 700 members of the Bengali community in Ireland attended the Sujan Durga Puja Festival across three days in the Kilnamanagh Family Recreation Centre last weekend.

The festival, which is typically held across five days in India, is a Hindu festival that pays homage to a Hindu goddess called Durga.

Across the three days, people attending the festival in Kilnamanagh were treated to food, live music, a glamorous cultural evening, two gala dinners, a live DJ and a variety of activities.

The festival was organised by Sujan – the Bengali Association of Ireland, and on Friday the Indian Ambassador to Ireland, Akhilesh Mishra, took part in the festivities.

Indy Bose, the president of Sujan – the Bengali Association of Ireland, told The Echo: “It was fantastic, there were 700 people in total across the three days.

“The Durga Puja is an annual celebration for the Bengali community, but people from other states in India also participate.

“It’s a three-day event, that’s how we celebrate it here, but in India it’s normally five days.

“It’s about worshipping the Mother God, Durga, but it’s more about celebration and festivities than the religious side of things.”

The highlight of the festival took place on the last day, Sunday, when the women in attendance dressed in traditional attire to celebrate Durga returning to the divine cosmos and her marital home, and to wish her well before she returns to Earth again for next year’s festival.

When asked what it means to members of the Bengali community in Ireland to be able to celebrate the Durga Puja here, Mr Bose said: “It means everything.

“All over the world, wherever you have Bengalis, you’ll find people celebrating it – it’s ingrained into our cultural DNA.

“It comes from our childhood, because it’s celebrated in India . . . and the Durga Puja in Kolkata has been recognised by UNESCO. It’s very important to us.”

This is the second year that the Sujan Durga Puja has been celebrated in the centre in Kilnamanagh, and the Bengali Association of Ireland is already looking forward to next year’s festival.

“We always strive to improve it every year,” added Mr Bose. “We started it 21 years ago when the Bengali community here was small, we started with about ten people coming.

“Now we have 700 guests over the three days. We want to scale up, but we don’t want to commercialise it – we want to maintain the homely atmosphere that we have.”