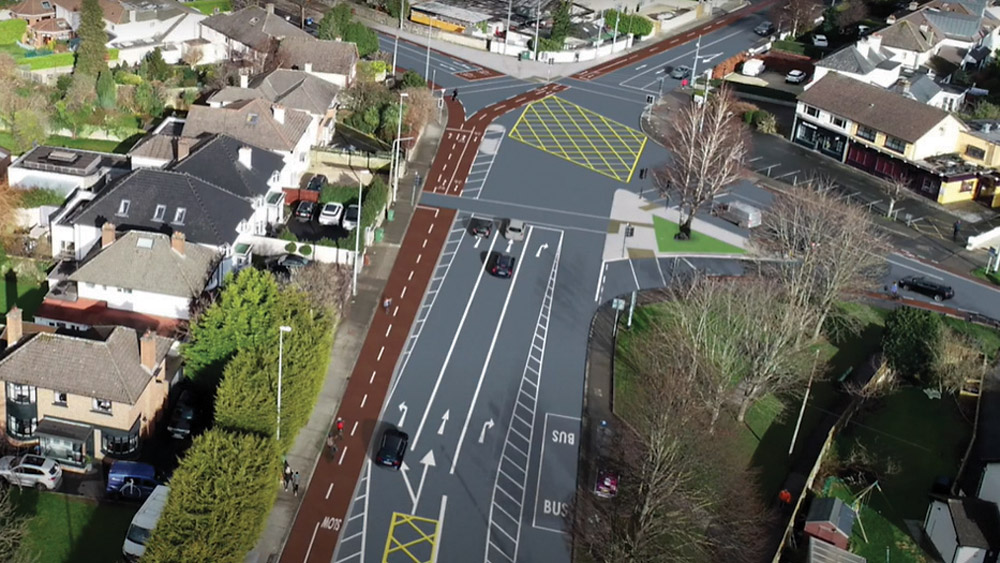 PLANS for the Dodder Greenway cycle route at the junction of the Firhouse Road and Butterfield Avenue were approved this week, despite one councillor saying it would cause “traffic chaos”.

The proposal will see two slip lanes at the junction being removed, and being replaced with dedicated, segregated two-way cycle lanes protected from traffic by a permanent kerb.

The Part 8 was brought before South Dublin County councillors for approval at a meeting on Monday, however, Cllr Ronan McMahon (Ind) voiced some concerns about it.

“There’s just one lane of traffic heading west on the Firhouse Road at the Blue Haven junction, and there’s a bus stop maybe 50 metres up from that junction,” he said.

“I think that that’ll cause traffic chaos. I mentioned it before when it was put before the area committee.

“If a bus stops there, it’ll hold up traffic right back to Templeogue Bridge and right back into the city, and I don’t think we’d be too popular for that.”

In response, Mick Mulhern from South Dublin County Council explained that the bus stop is an already existing stop that is in use.

He said that while road capacity may be reduced as a result of the greenway, the plans are centred on improving pedestrian and cycling infrastructure.

“If you’re coming down from Templeogue to the Blue Haven, those two slip lanes are being removed, and being replaced with dedicated, segregated cycle lanes,” he explained.

“Ultimately, this is about providing better capacity for people who are walking and cycling, so it does reduce some of that [road] capacity, but not to the extent that it will have an overly detrimental impact on traffic movement through there.”

The plans were approved by the councillors, with 30 voting in favour, two abstaining, and no votes against.

According to Mr Mulhern, construction is expected to commence next summer for approximately 18 months, with the phase of the project at the junction being complete by late 2024.

This is part of the wider Dodder Greenway scheme, and on completion this section will link the completed greenway works in Dodder Valley to the completed works in Kilvere Park.