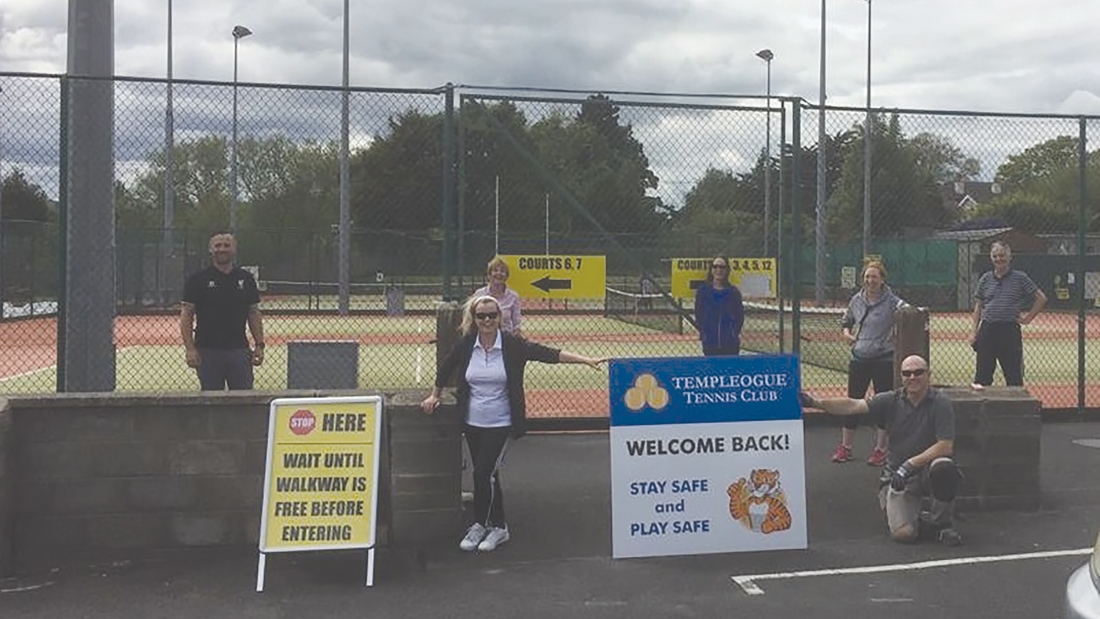 TEMPLEOGUE Tennis Club President, Paul Bennett has paid tribute to the tireless work of the TTC Executive Committee and volunteers in preparing the club for a return to action.

Opening back up for social play only last week after being forced to close down temporarily as a result of the COVID-19 outbreak, the club is delighted to be welcoming back all their members having put in place all the necessary measures to meet Tennis Ireland’s safety criteria.

Indeed the implementation of complete online booking and a sign-in system together with the drawing up of a list of safety protocols that include the use of tennis balls and the establishment of a one-way system in the club are just some of the measures that TTC have put in place to ensure a safe return for their members.

What’s more the club has taken down the dome that covered three of their 12 courts, allowing for more open-air play.

“It’s all electronic booking now for our courts and in our first week back we were booked out” said Bennett.

“It’s brilliant to have everybody back. It’s a great release for so many people after the lockdown and everybody is really appreciative of all the work that we’ve done.

“I suppose in the early days of the virus we didn’t really know how to handle it.

“We had seen this coming and we closed a few days earlier than the directive. We had meetings early on, asking ‘what if?’ and ‘how can we do this?’

“The Executive Committee that we have are brilliant. They’re the real powerhouse behind all the work that has gone in to getting us back. A huge amount of time and effort has gone into it and it’s been a real group effort.

“Initially it was the committee who led the work, but we have a group of great volunteers now helping out and it’s brilliant.

“It was brilliant on Sunday to see families down there, parents with their kids.

“The club has a huge kids ethos. We have our summer camps and opens. Really they’re the lifeblood of the club.

“And a lot of the kids were really missing their tennis and missing their friends, because really it’s a great social outlet for them too” he told The Echo.