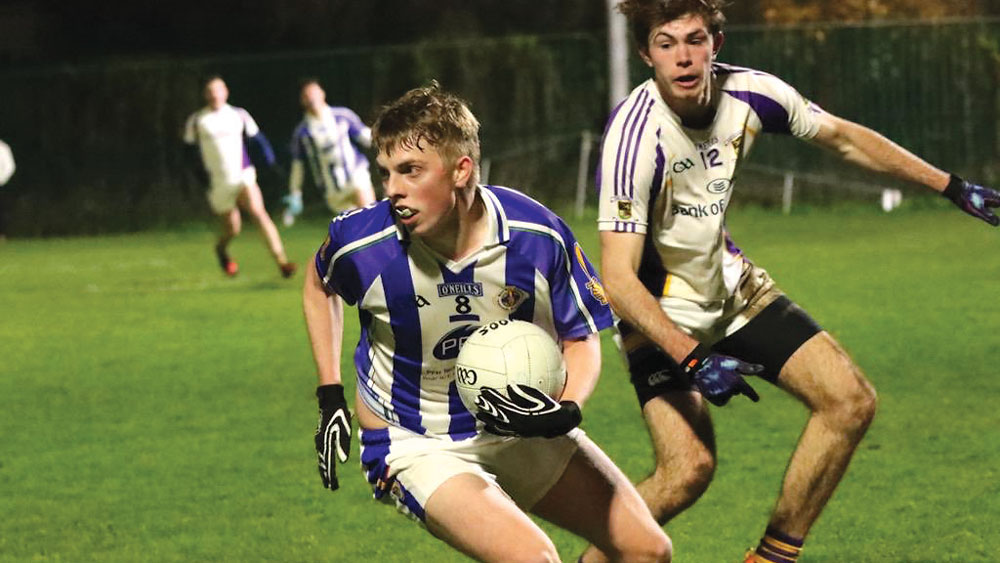 Action from the U21 decider in Sancta Maria

Boden hold off Crokes to secure U21 football title

CHRISTMAS arrived early for Ballyboden St Enda’s U21 footballers when they secured the ‘F’ Championship crown following a well-fought game against Kilmacud Crokes 3-5 to 2-6 in Sancta Maria last week.

There was particular delight for nine of the Ballyboden squad who were members of the hurling side that captured the U21 Hurling Championship a few days earlier.

The home side got off to the best possible start and after early exchanges, Boden shooting towards the Templeroan end, finished off a good move involving Kevin Kirwan and Edward Phelan with Enda Cashman on hand to hammer home the opening goal.

This was quickly followed by a pointed free by Cashman following a foul on Cian Durkin which settled the hosts.

Crokes replied with a point, however good defensive work led by Joey Donohue and Ollie Brophy limited the scoring opportunities for the visitors while David Monahan and Micheál Manning in the two wing back positions were limiting attacks.

Mid-way through the first half, Crokes scored a goal after a deflection from a Boden defender had them on level terms.

A well-taken point from the left foot of Eoghan Deignan edged Ballyboden in front as the intense midfield battle continued with Richie O’Halloran and Jack Hutchinson working hard to ensure possession.

The final five minutes of the first half were to prove vital to decide the destination of the title.

Luke Mulligan Lynch went on a fine run and was finished brilliantly to the net and moments later full forward Durkin hammered home another despite close attention from the Crokes defence.

Durkin and Crokes exchanged points as the Firhouse Road side established a 3-3 to 1-2 half time cushion.

On the changeover, an early point by Kilmacud was countered was cancelled out by Cashman but despite solid defensive work from Sean O’Donnell and Joey Donohue, the gap was closed to three points.

A well-sworked goal resulted in Crokes reducing the lead as the excitement built up and then Eoin Dunne was called into action twice to keep the visitors at bay.

Another point from play narrowed the gap to the minimum as the final entered injury time but clever use of possession saw Cashman fire over a converted free to leave two between them.

Despite a couple of nervous moments, Boden held out for a dramatic win to claim their second U21 Championship title in a week.