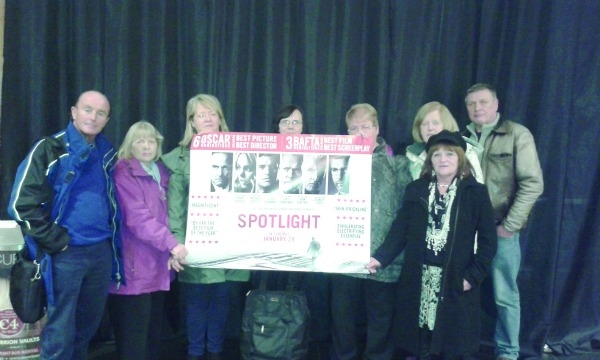 Spotlight is true story of the Pulitzer Prize-winning Boston Globe investigation into allegations of abuse in the Catholic Church – a year-long investigation that uncovered decades of cover-ups.

A stellar cast star in the film including Michael Keaton, Mark Ruffalo, Rachel McAdams, Liv Schreiber and Stanley Tucci, but those in the audience, have their own shocking stories to tell.

Terri Harrison (60), from Parkwest, was marched home from the UK by the Catholic Church in 1973, and denied pain relief in labour and medical care in St Patrick’s before nuns took away her son Niall.

The two were amongst a group of Irish Mother and Baby Home survivors – still seeking justice from the Irish State – who saw similarities to the Boston cover-up committed at home.

David said: “I felt like crying in parts as I watched the invisible scars coming from those actors who played victims. I believe no journalist should ever turn down any opportunity to expose abuse of any kind from a church that prides itself in selling Christianity.

“For me, those who know about this and do nothing are just as bad as those who commit these terrible crimes.”
Terri Harrison said: “This brought home the importance of our truth being known. I do not believe any Spotlight exists in Ireland. Boston people knew and did nothing, simply because their biggest institution was in threat of exposure.

“Seeing this proved the same for Ireland. How it allowed our abuse to go on, in the same way the Catholic Church is by far what the people need, and the protection of our most vulnerable people must be secondary to this.”

Irish survivors are seeking redress, apology and acknowledgement from the Irish State.

“The Scottish Catholic Church has apologised for child abuse and the Finnish Government issued an apology for forced adoptions,” said David.

“We had a therapist with us – Nessa Muller – who is independent and skilled in trauma and abuse. We are seeking more therapists who are independent to support us, as there can be a conflict of interest with HSE employees.”