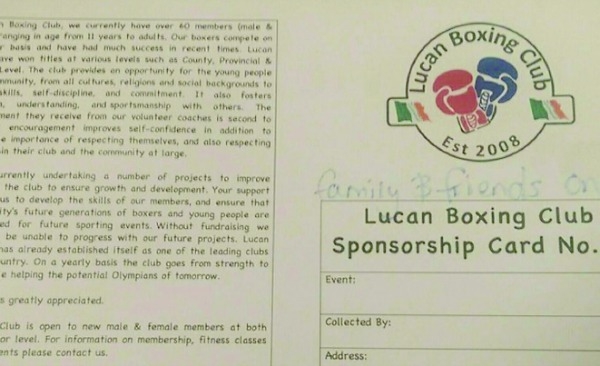 BOGUS COLLECTORS have reappeared in Lucan and a local boxing club posted a photo on social media of one of their official sponsorship cards.

Karl Broderick from Lucan Boxing Club says that it is an “ongoing problem”.

He told The Echo that on Monday last (July 25), he received a report that two boys, aged 10 and 12, were collecting money for Lucan Boxing Club with “bogus and fake cards”.

Mr Broderick told The Echo: “We get a lot of messages through social media and texts about bogus collectors. When we hold collections, there is no knocking on doors. The collectors are only allowed to collect from family and friends.”

The club stressed that collections are only for friends and family and there is no knocking on doors.

They asked anybody who comes across a collector claiming to be collecting for Lucan Boxing Club to contact the gardaí.

Last week bogus collectors were reported in Canonbrook Estate collecting for “St Peter and Paul’s Club”.The incident was reported to the gardaí.

Just two weeks ago, The Echo reported that local councillor William Lavelle had received numerous complaints in Finnstown Estate that children were carrying out bogus collections while adults accompanied them in cars a discreet distance behind. C

llr Lavelle said he asked one of the children where the club she was collecting for was. He said she had no idea and accused the parents involved of “burgeoning on child exploitation”.