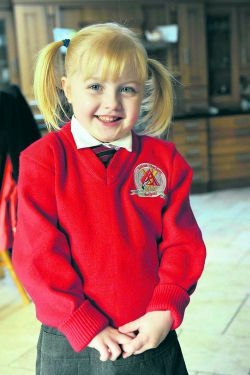 A BRAVE girl from Belgard, who is one of the young faces of Cystic Fibrosis Ireland, has been offered a special wish by Irish charity, Make-A-Wish.

Saoirse Brophy (7) has been given one wish by children’s charity Make-A-wish for how bravely and positively she deals with her cystic fibrosis [CF], a condition which sees the Second-Class pupil undergo a series of treatments before she even leaves her house for school each morning.
Saoirse’s mam Siobhan told The Echo: “Saoirse doesn’t look ill and it’s hard for people to understand what she goes through each day.
.

“Before she even leaves the house for school she has to have physio done and take six different types of medication.
“She has to be accompanied by a special needs assistant while in school and before she eats anything at lunch and break times, she has to take special enzymes – and that’s not including other medication and using her nebuliser.”
She added: “She is so amazing and despite all of the medication and therapy, Saoirse is so strong.
“She takes everything on the chin and with a big smile . . . and when people talk to her about CF she is very open and has no problem explaining to people what living with CF is like.
“She really is a great kid and definitely deserves to be chosen by Make-A-Wish.”
Saoirse, who was chosen to be a face on a positive campaign which aims to involve and promote those living with CF in Ireland, has deservedly been granted one special wish by the children’s charity, who met with the Solais Chriost pupil this week to listen to her top four wishes.
Saoirse told The Echo: “My top four wishes are to be a zoo-keeper for one day, own a hedgehog, meet Ant and Dec, and visit my family in New York.
“I’d be really happy to receive any of these wishes, but I would love to be a zoo-keeper for the day.”
She added: “I really like animals and I am really excited to see which wish comes true.”
Make-A-Wish Ireland grants children with life-threatening illnesses, between the ages of three and 17 years, with a wish – and since its inception in 1992, has granted more than 1,700 wishes.
Children are asked to choose a wish under I wish to go, I wish to be, I wish to have and I wish to meet and, after a meet-up with the Make-A-Wish team, one wish is granted. Saoirse will find out what wish she will have been granted in the coming weeks.
Visit www.makeawish.ie for more