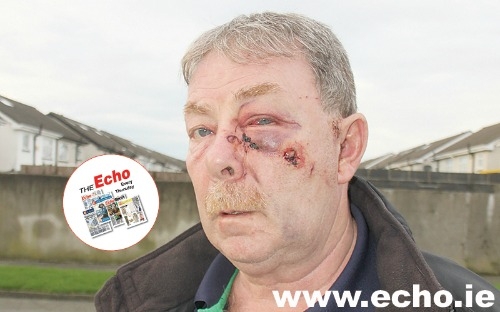 A BARMAN fought off three raiders, one armed with a gun, when they tried to enter the Kingswood Lodge early on Monday morning.

John “JC” Ryan (58) from Tallaght made sure that the three masked thugs didn’t get into the pub where two teenagers were cleaning up. John received 14 stitches in his face and may have fractured an eye socket when he was repeatedly punched and struck with a weapon by his attackers.

The incident which happened at 2.17am was captured on the pub’s CCTV system.

John had just gone to let a taxi-driver in to use the toilet when the three raiders forced their way in behind the taxi-man.

John was hit in the face with a weapon by one of the men while his two accomplices shouted “put him down, put him down”.

John told The Echo: “When we initially rang the taxi man, who we would know in the bar quite well, he had asked if he could use the toilet when he arrived at the pub.”

John had not realized that the raiders had already put a gun to the head of the taxi man as he arrived at the pub and ordered him to do as he was told.

He added: “I was just opening the shutters to allow him in and had no idea that the three raiders were standing behind him. I didn’t feel any fear because I thought it was just the taxi-man. I just reacted fast. I didn’t see the gun, I felt it. It was too late then and I just kept fighting.”

The CCTV shows how the largest of the trio immediately began punching John in the face, while another pointed a gun at him.

John wanted to keep the raiders from entering the bar where two teenagers were cleaning up. When the two teenagers started shouting, the trio left the pub and drove off in a black car. The gardai arrived soon after and John was taken to Talllaght Hospital and later transferred to St James’s Hospital.

He said: “They legged it when they heard the shouting. The gardai came as quickly as they could.”

John who worked as a prison officer for 31 years said he never witnessed such a violent attack in his years of service in the Prison Service than he was a victim of two days ago. He said: “They would attack you but not like that”.

A native of Doon. County Limerick, John played hurling up to 20 years ago and then became a referee. He would be well known in Dublin GAA circles.

Just after The Echo spoke to John, he was leaving for further treatment in St James’s Hospital.