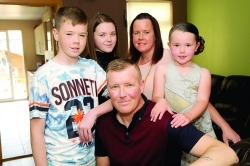 A STRONG family bond will be to the fore after Fathers Day this week, when two brothers from Ballyfermot go under the knife for a life saving kidney operation.

Alan Byrne (44) is donating a kidney to his brother Declan 'Deco' Byrne (42), in the ultimate symbol of brotherly love.
The pair go into Beamount Hospital on Fathers Day, to prepare for the operation on Monday, after successfully undergoing final medical checks this week.

Deco, a father-of-three from Ballyfermot Avenue, was diagnosed with igA nephropathy – a sign of kidney disease – over 20 years ago when his ankles swelled up on a holiday in Greece.
Doctors told him he would require a kidney donation by the time he was 30, but Deco managed to hold off the inevitable for over a decade, by living a healthy lifestyle.
“I thought I’d get away with it,” said Deco.
“No chocolate, no breakfast rolls, no processed foods, I stuck to my diet and kept up with fitness.
Despite being on dialysis since February, Deco kept working and playing football with the Drumfinn over-35’s.
It wasn’t until five weeks ago, that his body finally gave in to the demands of medical science.
“I was very tired after the match, and had no energy,” said Deco.
He continued: “I do dialysis during the day, that would give me more energy, but my kidney function is now down to six-seven per cent.
“At night I’m hooked up every night to the dialysis, and have to sleep on my back. It’s too noisy for the missus, so I had to move the machine to the back room,” quipped Deco.
When Deco was forced to go on dialysis, older brother Alan, a father himself, got himself tested to see if he was a compatible match.
“I was surprised when he told me he got tested,” said Deco.
“Sometimes it’s harder for him. Alan has to be off work for 12 weeks due to the operation, and was back in hospital this week for his final antibiotic check. But his blood type and tissue type are a good match.”
Deco encourages people to contact the Irish Kidney Association for free donor cards, by texting DONOR to 50050, or text KIDNEY to 50300 to donate €2.