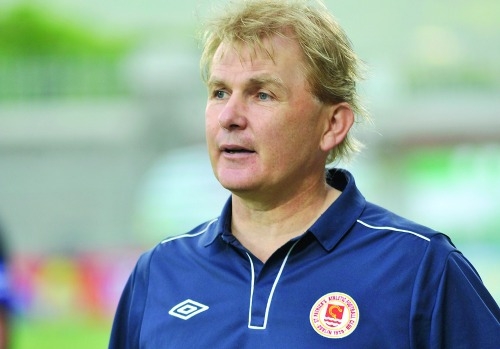 With just hours to go before St Patrick’s Athletic welcome Skonto Riga to Richmond Park in their Europa League first-round qualifier, manager Liam Buckley has urged fans to get behind the team and make it another memorbale night in Europe.

Trailing 2-1 after the first leg in Latvia, the Saints know they must score tonight, and having lost just one of their last 12 European games in Inchicore, Buckley is fully aware of just how important the home crowd can be.

“We’ve had some great nights as a club in Richmond Park in European competition” he explained to stpatsfc.com. “For me, our win over Široki Brijeg three years ago was a magical night, and the crowd really helped us get over the line.”

“If we can get the crowd behind us that could be the difference between getting through and not.  Hopefully the Pat’s supporters will make it out to the game in big numbers, as if we can have a capacity Richmond Park behind the players that will be massive for us.”

Conan Byrne echoed his manager’s thoughts, saying “if we play to our potential, and with our record in Richmond Park and with the crowd behind us, we are capable of getting the result we need.”

In team news, manager Liam Buckley confirmed that both Ger O’Brien and Christy Fagan have recovered from the injuries that saw them both leave the pitch in the second half last week, however, Sean Hoare won’t play any part after he suffered a hamstring tear.

Kick-off in tonight’s game is 7:45pm, and having not played a European game in Inchicore in two years, everyone involved is hoping to make it a night to remember for the Saints.