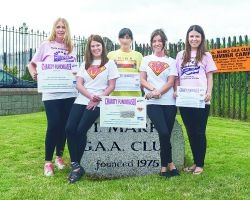 A BUMPER charity fundraiser is being staged in St Mark’s GAA club this August 22, and the entire community is invited to attend, reports Mary Dennehy.

Organised by five cousins, the charity fundraiser is a shining example of the innovative and supportive work being carried out voluntarily in the Tallaght community for charities in need.
Kicking off at 8.30pm, the event will raise much-needed funds for three charities, children’s cancer group Aoibheann’s Pink Tie, Michael’s Little Steps, a family-driven campaign to raise funds for toddler Michael Barry who needs specialised physiotherapy, and Tallaght-based mental health awareness group, NINA for Life.

One of the organisers, Ailish McEvoy told The Echo: “Between the five of us we have some sort of connection to each of the three charities and are aware of the amazing work that they do.
“Aoibheann’s Pink Tie is starting to become quite well-known, but the other two charities are small, community-based charities that need support in raising funds and awareness and we are happy to help them.”
She added: “We have gotten so much support from the community, including St Mark’s GAA club, which has given us the hall for free, and a host of local businesses, who have donated raffle prizes or services.
“So many people have supported us in getting this night off the ground and we hope that people come along and help us to raise as much money as possible.”
Tickets to the event, which cost €5, can be purchased now, with a limited number available on the night, which includes finger food, karaoke and a late DJ – with a monster raffle boasting a host of top prizes.
For further information on the event, which is in St Mark’s GAA Club in Springfield, or to book tickets visit the Charity Fundraiser Facebook page www.facebook.com/events/451857011630895/