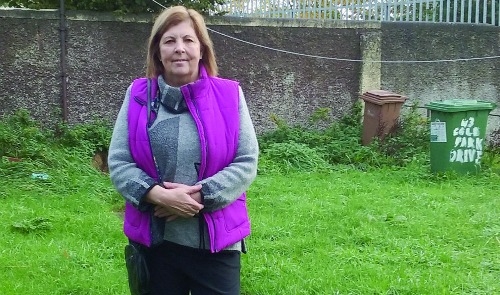 BURGLARS are finding easy access to homes on Colepark Drive due to overgrown land at Cornamona Court.

At least two homes on Colepark Drive have been burgled in the last few weeks, and residents fear “easy access” from the former elderly housing accommodation site at Cornamona Court.

Two houses have been broken into in the last three weeks. It’s free open range over the wall and easy access to gardens.”

Cornamona Court is one of five vacant Dublin City Council land banks proposed for development by the local authority.

The council are seeking expressions of interest from developers, but uptake for the sites, which includes Cherry Orchard Hospital lands, has been slow.

Cornamona Court was a former site for elderly accommodation, but has not been used in nearly ten years.
Sinn Féin councillor Daithí Doolan said burglars are “hiding” in overgrown parts of the land, “checking out houses on Colepark.”

Cllr Doolan says plans to redevelop the 0.7 hectare site back into an elderly accommodation unit received a setback, when the Department of Environment reduced the scale of the proposed development.

Cllr Doolan said: “We were planning 75 units but the Department of Environment said no – that it would have to be 60.

“This is in the middle of a housing crisis, yet they are running down public housing.”

Asked if she would like to see Cornamona Court refurbished, Ms Tiernan said: “I’ll believe it when I see it.”