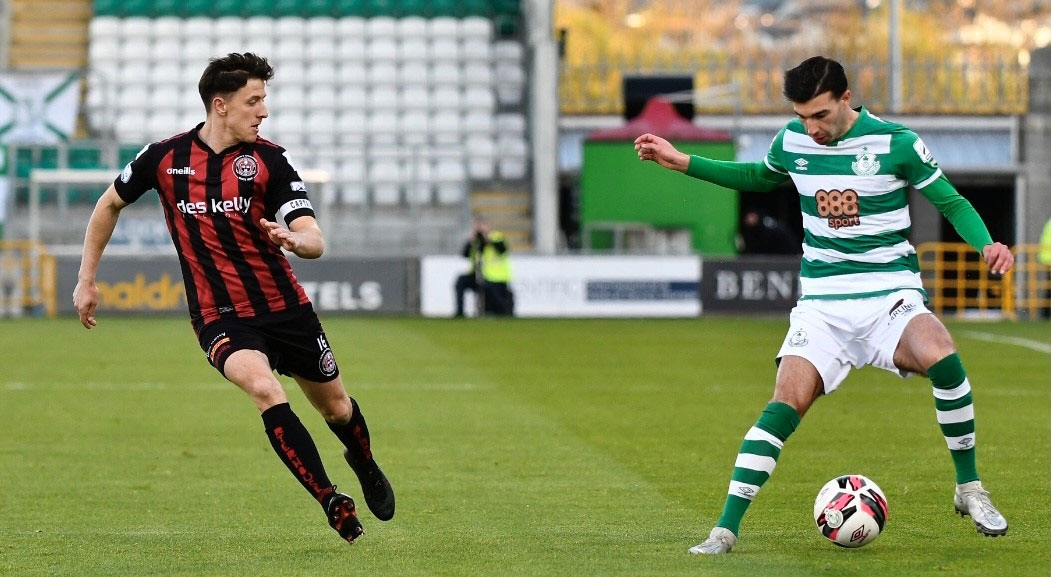 Graham Burke’s 76th-minute penalty was enough to give Shamrock Rovers a 2-1 victory over arch rivals Bohemians in an SSE Airtricity League Premier Division clash at Tallaght Stadium this evening.

Traded goals between Dylan Watts and Ross Tierney ensured this Dublin Derby was delicately poised at the midway point in the action, but it was Republic of Ireland international Burke who was ultimately the match winner in the final-quarter.

This puts the Hoops level on points with St Patrick’s Athletic, albeit the Saints marginally lead the table on score difference.

Having begun the move himself, midfielder Watts was on hand to sweep home in the fifth-minute for a Rovers breakthrough.

Bohs soon settled into the contest, however, as Liam Burt missed a sitter before turning creator for an equaliser on 19 minutes.

Following a patient move, Liam Burt’s lofted delivery from a left-hand angle was headed to the net at the far post by Tierney. 1-1 at the interval, this game was there for either side to win.

Space was at more of a premium in the second period and yet it wasn’t without incident. After Burt initially gathered possession deep inside the Rovers half, Tierney raced away down the left-wing.

He played a ball into the area for Georgie Kelly, who clipped the outside of the post under severe pressure.

After breathing a sigh of relief in this instance, the Hoops bench were elated with 14 minutes remaining.

He was shown a straight red-card as a result and Burke dispatched the resulting spot-kick – despite the best efforts of opposition netminder James Talbot.

This was the springboard for Rovers to claim maximum points and extend their unbeaten league run to 29 games, stretching back to the 2019 season.