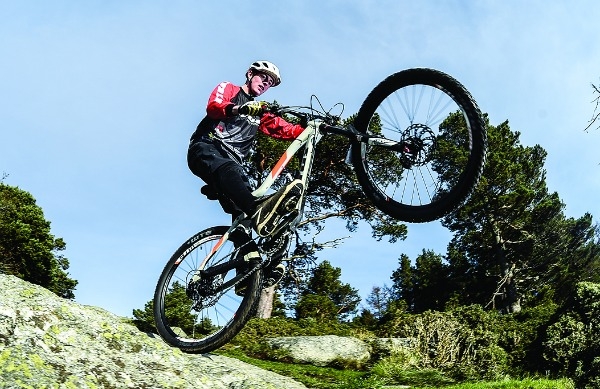 Callaghan to lead the charge for Vitus team

The 18-year-old compet-itor, who finished sixth in the 2015 Enduro World Series Under 21 section, runner-up in the European equivalent and picked up the Irish National Enduro Championship, will be hoping for an even higher placing on the global stage with the backing of Vitus.

“It was fantastic to get the deal done with Vitus” Callaghan told The Echo.

“I’ll be competing on a new Carbon Fibre bike, that’s lighter and stiffer. I’ll be working with pretty much the same people, so I know them and they’re only up the north.

“I’m now working with a new coach Chris Kilmurray and I’m getting a good block of training in.

“I’ll be doing some small cross country races, which are that bit more physical so I can get the fitness up.
“A top three finish in the Enduro World Champion-ship will be my aim, but that all depends on who goes to Chile and Argentina and how well they do there.

“I’m missing two rounds this year [as opposed to four last season] so hopefully I can finish higher up in the championship” he said.

Indeed Callaghan, who is also still supported by sponsors Pure Power Systems and Cable Technical Service, will not have the budget to travel to Chile and Argentina for the opening two rounds of the series.

Competing on the new Vitus Sommet CRX, he will enter the series in Round Three which takes place in Carrick Mountain in Wicklow where he recorded a stunning third place finish in the Under 21 division last year.

Following that he will contest rounds in France, the United States, Canada and Italy hoping to finish among the top three.

On top of that he will also line out in the Northern Ireland Championship and Gravity Enduro Series which kick off at the end of March and the beginning of April respectively.

He is also planning on spending five to six weeks in France, training and competing in a number of races in what is sure to be another hectic year of competition for the young Dubliner.

Delighted to have Callaghan on board for the new season, Simon Cordner, Vitus Bikes Brand Manager said “We’ve been following Killian’s progress over the last year through our involvement with the Biking.ie team throughout 2015.

“Seeing him land a stunning third place finish in front of 10,000 spectators at the Chain Reaction Cycles Emerald Enduro EWS last May was fantastic and to take sixth place in the overall EWS standings as a privateer shows his skill and determination.

“We’re delighted to welcome Killian into our Factory Racing set-up and hope that with this added support in 2016 he can continue to progress.”