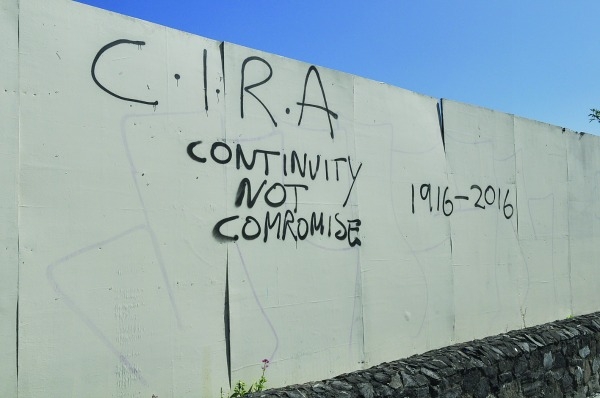 Calls made for removal of controversial CIRA graffiti

CALLS have been made for South Dublin County Council to prioritise the removal of Continuity IRA graffiti that is appearing across Tallaght.

In recent months, this type of graffiti has been spotted right across the Tallaght area, with some local councillors believing that there is a “concerted campaign” to brand communities with Continuity IRA messages.

Most recently, slogans have been sprayed on hoarding in Tallaght village and at the St Dominic’s side of the Charlie O’Toole Bridge – with a wall beside the church in Fettercairn also vandalised.

Tallaght Central Fianna Fáil councillor Charlie O’ Connor told The Echo: “This type of graffiti is becoming more and more visible in our community and I believe that it is part of a concerted campaign – not just here in Tallaght but right across Dublin.

“Communities are always battling against graffiti, however the removal of graffiti that is offensive or inappropriate for public spaces should be prioritised by the council.

“The council has a zero policy for offensive graffiti, whether it is words or images, and that policy needs to be enforced.

“The council did remove a large piece of [Continuity IRA] graffiti from a wall beside the church in Fettercairn recently, which was being passed by people going to church and kids walking to school.”

Tallaght Central Sinn Féin councillor Brendan Ferron also requested on Monday, May 30, the removal of the graffiti from Tallaght Village and the Charlie O’ Toole Bridge.

He said: “People work very hard to make our village look well and improve its appearance.

“The area around the Esso site in the village has looked shabby for some time but the Tallaght Community Council came in and cleaned up the area and it’s quite frustrating that someone would then come into the village and put that kind of graffiti up.

“People do not want to see paramilitary graffiti like this in their village and my opinion is that it would receive very little support from communities here in Tallaght.

“The council is generally good at removing offensive graffiti however, I would have liked to have seen this graffiti removed quicker.”

When contacted by The Echo, Mary Maguire, Senior Executive Officer in Environment, said: “The council is aware of recent instances of offensive defacement of property, both public and private, in the Tallaght area.

“To date we have received six complaints, five relating to the Tallaght Village area, including the St Dominic’s side of the foot bridge and one in Kilcarrig estate.

“Arrangements have been made to remove the defacement in line with our graffiti protocol.”