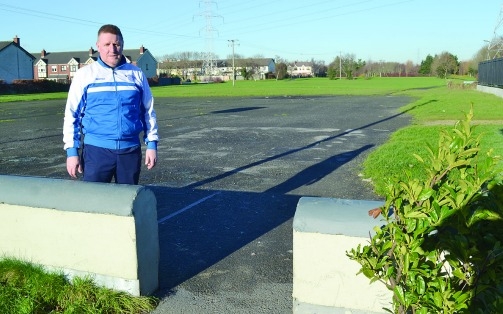 A MOTION was tabled at this weeks Clondalkin Area Committee meeting of South Dublin County Council calling for the council to support Knockmitten United FC’s campaign for an astro-turf pitch in Knockmitten Park.

The motion was tabled by Cllrs Eoin Ó Broin, Kenneth Egan, Trevor Gilligan and Francis Timmons calls on SDCC to “fully support Knockmitten United FC and their efforts to secure funding for an astro-turf pitch located on the old basketball court beside Knockmitten Community Centre”.

The motion also calls for senior management “in both Environment and Community Services to do everything in their power to ensure that the land ownership issue is resolved and planning permission is in place in advance of the next round of Sports Capital Funding”.

Cllr Ó Broin told The Echo: “Knockmitten United FC have been working for almost two years to secure an astro-turf pitch on the old basketball court in Knockmitten Park beside the community centre.”

He said the club provides a huge resource to the local community involving hundreds of young people in boys and girls teams every week and the provision of an astro-turn pitch is a key part of their development plans.

In 2014, the club worked with SDCC to prepare an application to the Department of Transport, Tourism and Sport capital grant programme in February 2015 but due to land ownership issues it was not possible for the application to proceed.

Cllr Ó Broin added: “ ‘South Dublin County Council is fully behind the new facility and through the Community Services Department has been actively supporting the work of the club. However with the sports capital grant application process due to open soon the land question remains unresolved. If this matter is not addressed Knockmitten will miss the opportunity for funding for another year”.