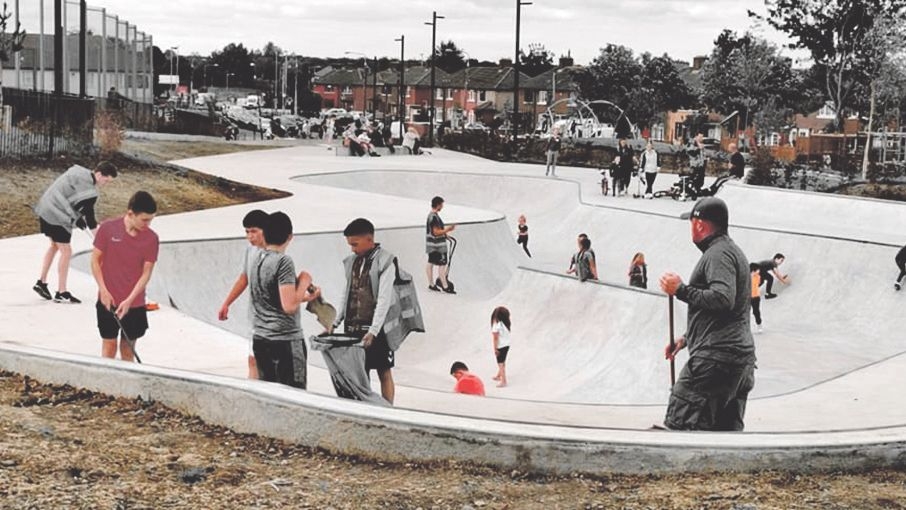 CCTV at the new €1.6m skate park in Ballyfermot has now been connected to the garda station for remote access and monitoring, following a number of anti-social incidents.

The equipment was installed prior to the opening of the park and playground, but was not linked to the station, according to Dublin City Council.

Volunteers cleaning up the skatepark

During the first few weeks of the amenity opening to the public, anti-social activity included a stolen car which was driven into the playground on a Friday night.

Only for wet weather on the night, the car would have made it up onto the skate track.

Gardai have stepped up patrols in recent weeks and anti-social incidents have reportedly decreased, according to authorities.

A major part of this is the involvement of Ballyfermot Youth Service, who run a BMX club at the track, and an action group they helped to set up to develop ownership and respect for the facility.

Youths and volunteers from the area meet up at the skatepark every morning and evening, seven days a week, to clean it up.

BYS youth workers also engage with other young people who are in the park at the time.

The city council attributed a number of reasons for early problems, citing young people confined at home due to the lockdown, the “excitement generated” by “an amazing new resource”, and the “lack of travelling abroad for holidays and fine weather.

“All contributed to higher than average numbers of young people visiting the skate park and causing disruption to the residents adjacent to the facility,” said a council area report for July 15.

In the absence of fencing, a boundary wall between the playground and Le Fanu Road will be examined by the council and screening shrubbery will be planted.

Bollards are due to be installed along Blackditch road, with granite slabs in place for the interm.

She said they will continue to work with youth services, engage with new initiatives and they intend on revisiting this in a couple of weeks.

Cllr Daithí Doolan (SF), who had a motion calling for stringent security at the skatepark, said they had asked residents to “have a leap of faith” prior to the installation of the facility.

Referencing the community who were not informed of an official opening, Cllr Doolan said: “Unfortunately, the first morning it opened, we started getting calls. The builders finished up, took down fencing, but community gardai should have been involved.

“There was supposed to be bollards on Blackditch Road where the robbed car got in. The real issue is 5/6pm onwards, that needs to be properly addressed.”

Cllr Vincent Jackson (Ind) commended the “15-20 young people there every morning” to clean the place, and the BYS engagement of “60-80 kids per day”.

“Slowly but surely it will address the issues,” he said.

Cllr Tina McVeigh (PBP) called for the council to revisit a survey of young people in the area, to determine their thoughts and needs.