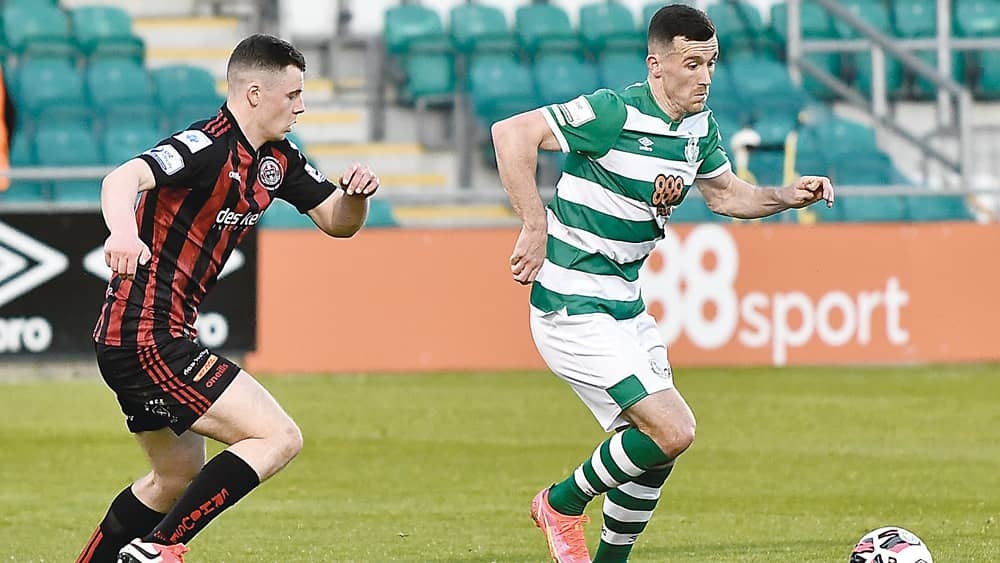 SHAMROCK ROVERS will be hoping to keep the ball rolling in their defence of the League of Ireland when they travel to Ballybofey to face the tricky Finn Harps on Friday.

The Hoops are currently joint-top of the table with Dublin rivals St Patrick’s Athletic on 17 points and will be eager to keep the pressure on with another three-points in the can.

Aaron Greene in action for Shamrock Rovers against Bohemians

You will have to go all the back to 2008 to find the last time the Harps claimed a win against Rovers in the league.

A 2-0 win saw the hosts take the win in Donegal that day, which was their second win on the bounce against the then homeless club.

Rovers had spent two decades moving around the county and since their move to Tallaght in 2009, they have been unstoppable against the Harps.

In the 12 meetings since, Rovers have only dropped points on one occasion and tabled two wins on their way to the title last season, including a 0-2 win on the road.

While Ballybofey has remained somewhat of a fortress for Ollie Horgan’s men since he took charge in 2013.

Defying their yo-yo relegation and promotion existence to stay in the top flight since 2019, Harps made the perfect start to the league this season with wins over Bohemians, Dundalk and Waterford.

But they remain without a win in their last three, after falling short against St Pat’s, Sligo Rovers and Longford.

Last Friday night in Tallaght Stadium, they hosted the Dublin Derby against the Gypsies and following a scrappy sending off that resulted in Graham Burke converting a penalty, they claimed all three points.

Perhaps the highlight for the Tallaght outfit to date has been the emergence of Liam Scales, operating in the left wing back position.

A Republic of Ireland Under 21, Scales joined the Hoops in 2019 after winning the First Division with UCD.

Only 22, Scales has become formidable down the left flank and provided the assist for Dylan Watts’ goal against Bohemians last week.