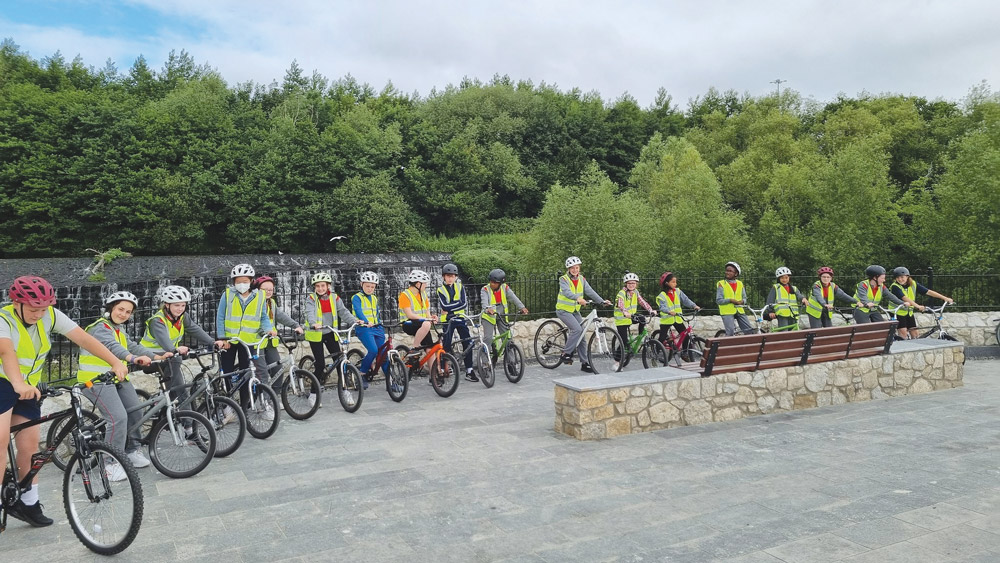 Children getting great use out of controversial new cycle lane

PRIMARY school students are getting great use out of a new cycle lane, which has been a bone of contention among residents who have described it as a “complete mess”.

As part of the South Dublin County Council initiative, the existing two-metre footpath to the north of Avonbeg Road has been increased to four-metres for shared pedestrian and cycle space.

Traffic calming measures are also part of the plans, with the existing carriageway width of Avonbeg Road being reduced from nine to six-metres as a means to disincentivise “excessive speeding”.

Cycling is adjudged as a “credible alternative for short and medium length journeys” by the council.

According to a 2019 report by the National Transport Authority into Bike Life, there are 60,000 daily trips within the Dublin Metroplitan area made by bike that would otherwise be made by car.

With this, providing the necessary infrastructure to encourage more people to choose cycling over “unnecessary car trips” was at the forefront of the goals behind the Cycle South Dublin programme of works.

The council focused on designing and delivering 19 projects between 2020 and 2024, including the 17km Dodder Greenway linking Sir John Rogerson’s Quay in the city centre to Bohernabreena reservoir.

Responsible for 14km of the route, the local authority has been chipping away at the scheme along the Dodder with the Avonbeg Road Cycle Scheme forming part of it.

The scheme has been a bone of contention for residents of the surrounding community in Avonbeg, St Dominic’s, and Bolbrook, for creating a potential traffic hazard.

Gerard Downes, whose parents live in the area, recently wrote into The Echo about the Avonbeg Road Cycle Scheme, describing it as a “complete mess”.

“On the opposite side they made the footpath far too wide which has caused a lot of this trouble,” Gerard Downes said.

“Instead of just cutting into the muck and adding on there they decided to add more than a meter onto the existing one causing a serious bottle neck.

“It’s now taking cars anywhere between 15-30 minutes to come down that road early in the morning especially when dropping the kids to school.

“One of my biggest problems is if, God forbid, you get a fire anywhere on that road you will never fit an ambulance or fire brigade up there at the same time and as we know every minute counts.”

However, St Dominic’s NS is pedaling a different narrative, with their pupils using the 1.3km stretch of the route at Avonbeg Road for trips to the Balrothery Weir and back.

The school runs a six-week safe cycling initiative every year, and at the end of this term, the pupils were able to put their newly learned biking skills to good use.

“On their final day, we were able to bring the pupils out along the cycle scheme down to Firhouse Weir and even past that, down to Ballyboden St Enda’s and back up then,” St Dominic’s NS principal Seamus Vaughan tells The Echo.

“It is a big advantage for us because the pupils are able to safely leave our school gates here directly onto the greenway and not have to cross any roads.

“There is one road just before the Edge café but that’s it before we get to the Firhouse Weir.

“I mean, we had 400 kids out on the walk that day down to the weir and two classes of 20 children each, so 40 children on their bikes using the greenway.

“We are absolutely delighted with it from that perspective.”

Mr Vaughan does recognise that the traffic management is already difficult in the area during peak times with a lack of drop-off areas or substantial public parking.

“The majority of our students are either walking or cycling to school and there is no doubting that the greenway makes it much safer for them getting here,” Mr Vaughan elaborates.

“However, for parents that are dropping children off to school in cars, the road has certainly narrowed quite a bit.

“We’ll have to wait and see to full effect of the changes to the road when all the works have wrapped up and the school returns.”

Come September 1, St Dominic’s will have a new pedestrian/cycle entrance off St Dominic’s Road which will enable pupils on foot or on their bikes to access the school directly from the greenway.

This new entrance is scheduled to be constructed throughout August by the developers of the Avonbeg Road Cycle Scheme in preparation for the school’s new term.