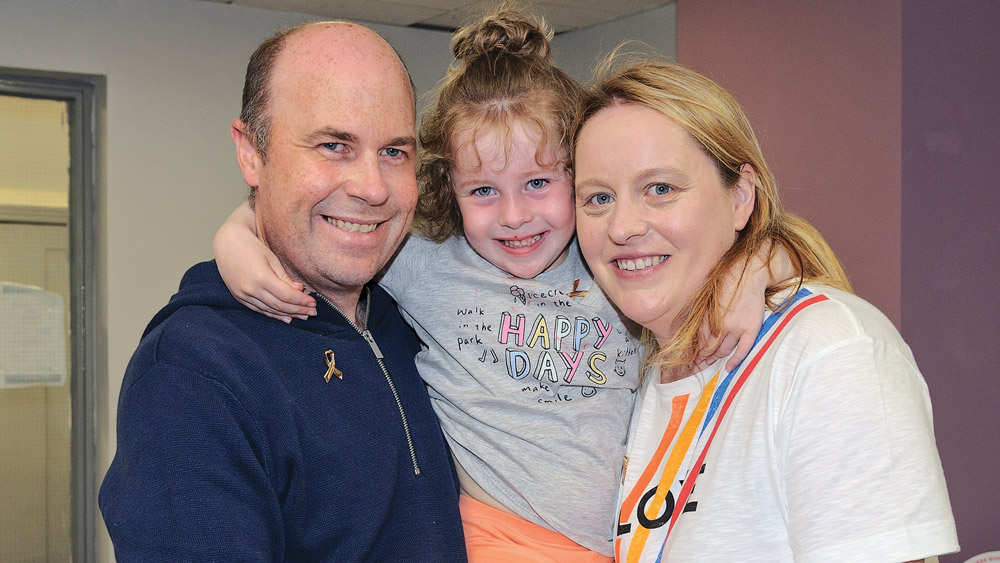 A LOCAL family raised €2,500 for two children’s healthcare charities at a coffee morning last Friday, where they also reflected on their own experiences with childhood cancer.

The couple, who now live in Lucan with their two children Aoife, five, and Orlagh, two, became familiar with both charities as their children were born prematurely and received care in the Coombe for the first 11 weeks of their lives, and Aoife was diagnosed with cancer last year.

Little Aoife was diagnosed with Wilms’ tumour – the most common type of kidney cancer in children – in March 2021 at age four, when her parents noticed she was unusually tired and felt ill.

“She had a pain in her belly one Sunday morning, and we knew something was wrong because she wouldn’t be the type to complain,” Aoife’s mam, Bridget, told The Echo.

“She just seemed to deteriorate over the day and became lethargic. We went to TLC Doc in Tallaght that day and the doctor sent her straight to Crumlin.

“When we brought her there, they said Aoife was seriously ill. They did scans and tests and her blood pressure was really high.

“Once they got her blood pressure down, she improved, and they did an ultrasound and knew something was wrong with her kidney.” 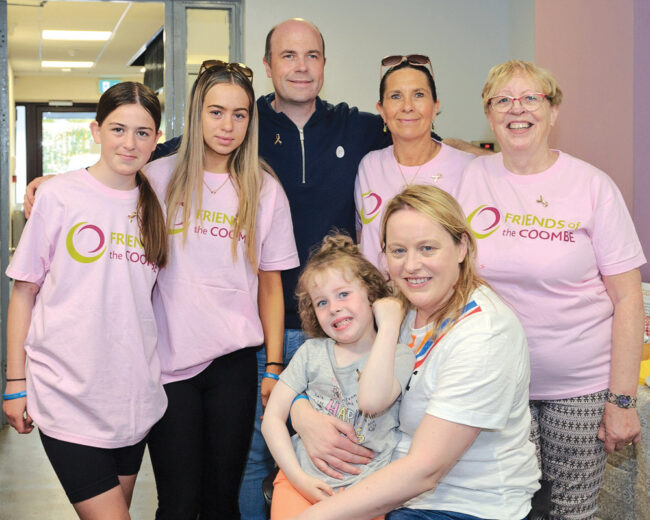 Mark, Aoife and Bridget with Ava, Kelsey, Lorraine and Rita

The McQuillans spent that Monday in isolation in the hospital to await the results of Covid tests, and shortly after they got the all-clear they received the news that Aoife had cancer.

“On the Tuesday they did more tests on Aoife, and that evening the renal doctor came in and said she’d been moved to the oncology team,” Bridget explained.

“They did scans on her, then the oncology doctor came in and said it was a Wilms’ tumour, but it was stage two, and she was happy that it was caught early and hadn’t spread anywhere else.

“They decided to remove Aoife’s kidney, then they did six months of chemotherapy.”

The little girl dealt with losing her hair and the sickness that chemotherapy caused, but her parents always reminded her that the treatment would ultimately make her better again.

“Once we got over the initial shock of her diagnosis, and we could see a pathway to the future, we had to turn around and try to make it a happy time,” said Bridget.

“We told her that her hair would fall out, but that just meant the chemo was working, and we told her that all that mattered was that she was getting better.

“We told her that the lump she had was very silly, and it was doing silly things in her body, but the chemo would make it better.

“The side effects of chemo are the same for children as they are for adults, but we never let it get in the way of things – when Aoife had good days, we’d go on staycations around Ireland.”

At the end of September 2021, shortly after she began attending junior infants in St Thomas’ Primary School in Lucan, Aoife got to ring the bell in the oncology ward in Crumlin hospital that signified the end of her course of chemo.

“She’d see that bell every day she went in, and we explained to her that her day would come when she could ring the bell,” said Bridget.

“Our plan on the day was for her to finish chemo, ring the bell and move forward. We took Aoife and Orlagh to Build-A-Bear afterwards to make a bear to mark the day.

“Orlagh understood part of it, like she’d see the hospital and call it ‘Aoife’s hospital’, and Aoife had a port put in for chemo and Orlagh would kiss it.

“It was a big journey for Orlagh too, because her older sister wasn’t able to play with her some days. But if you met them now, you wouldn’t have a clue what they’ve gone through.

“They were very sick, but they came through it. They’re both amazing.”

The family were supported by the staff in the Coombe when their daughters were ill after they were born, and the Childhood Cancer Foundation supported them when they grappled with Aoife’s cancer diagnosis and her ensuing treatment.

As a result of this, the family decided to hold their first fundraising event in aid of the Friends of the Coombe and the Childhood Cancer Foundation last week – which they hope will be the first of many.

“We just wanted to give back,” Bridget explained. “These charities supported us through both situations.

“The thing is, we can’t change what happened in the past, but we’re not the last family to have a child with a cancer diagnosis or born prematurely,” said Bridget.

“We want to give back to the charities so those families can still have that support available to them.”

Both Orlagh and Aoife are now healthy and active young girls, and the coffee morning last week offered a moment of reflection for the McQuillans.

“The coffee morning was really uplifting, and a huge contrast to where we were this time last year, and for us to see how far we’ve come in a year,” said Bridget.

“I’d like any other family going through this to know that it will get better, and there is a way through it.”