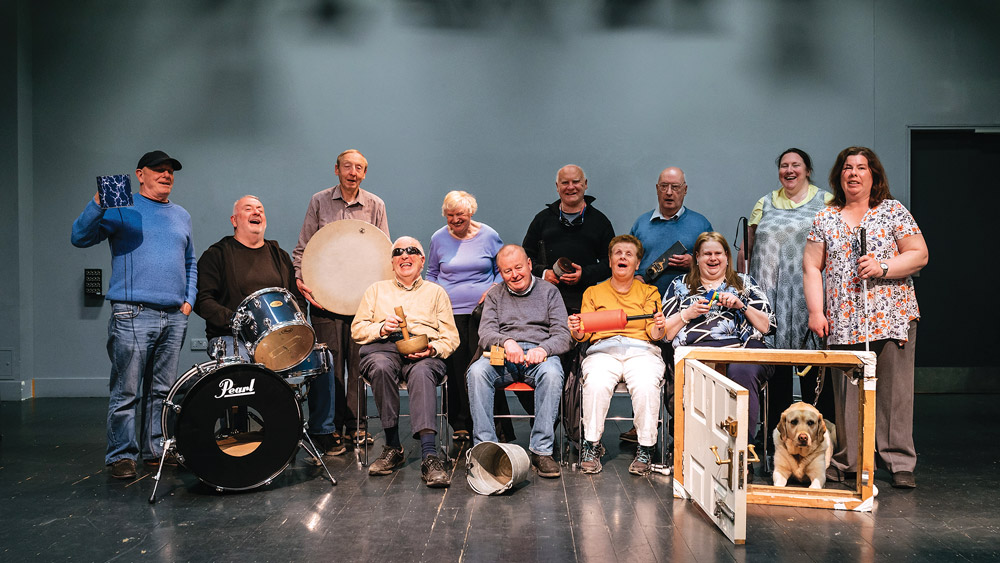 In the Dark Full Group Picture

Sightless Cinema: Full house for ‘In the dark’ opening night

Sightless Cinema’s performance of In the Dark had a full house on their opening night and an enthusiastic audience response at the Rua Red South Dublin Arts Centre, Tallaght on June 22.

Sightless Cinema, a performing group comprised of those with vision loss, has been based at Rua Red since 2017. The group is led by theatre-maker Ciarán Taylor, who also creates original theatre with his Carpet Theatre. In 2020, the group performed an online, lockdown comedy entitled The Covid Tapes, and they presented their telephone comedy Ballymuch Exchange at a listening event in the Civic Theatre last year.

This year’s live audio performance, In the Dark, tells the true stories of five of the members of Sightless Cinema. Blindfolds were offered to sighted audience members so they could experience the show in the same manner as blind audience members.

This unique and powerful experience received a warm response from the audience, with reviews in an audience survey celebrating the “fantastic, deeply moving” show as “thought-provoking” and “extremely well-played and presented”.

“It was a very moving but also humorous depiction of the cast’s personal experiences. The sound design gave me some real insights, and my heart raced,” said one audience member.

Following the sell-out success of the June 22, 23, and 25 shows, the Sightless Cinema has already set plans in motion to bring back the show.

Updates on upcoming performances and projects can be found on the group’s facebook page, Sightless Cinema.