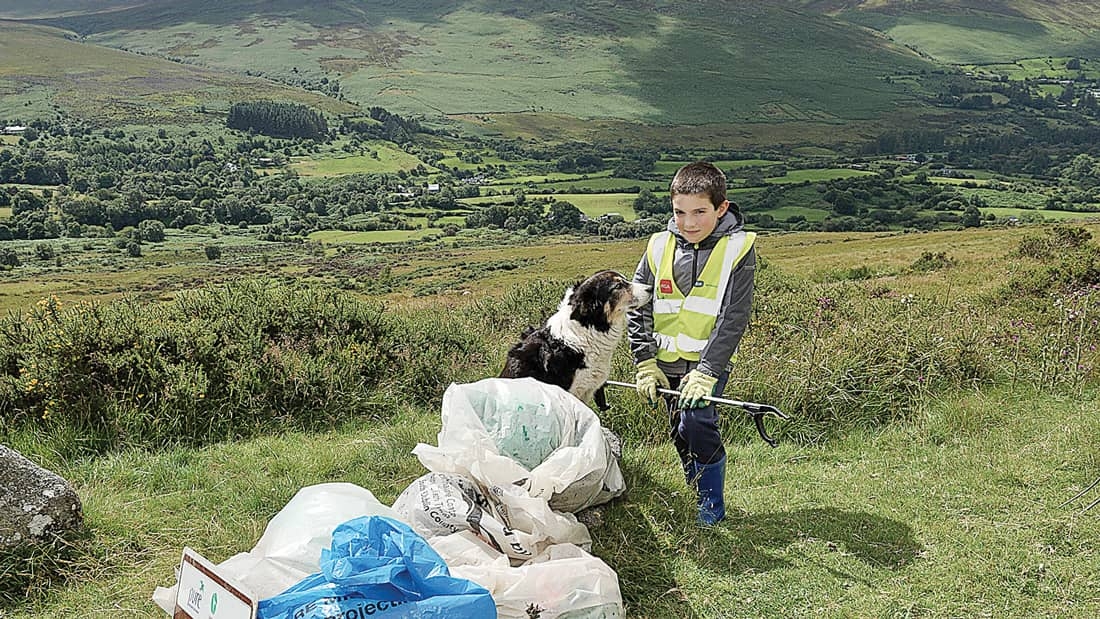 Christopher (9) helps clean up the environment

MEET Christopher Collins, a nine-year-old boy who is cleaning up his area of Bohernabreena and Glenasmole, one litter-pick at a time.

Living in Boherna-breena, Christopher is not only cleaning up his area once or twice a week but is challenging people living in and visiting the area, and South Dublin County Council, to do more for our local environment and its wildlife.

A third-class pupil in Glenasmole National School, Christopher and his mam Mary embark on regular litter-picks – keeping local elected representatives in the loop about litter and illegal dumping issues.

“I started doing litter-picks last year and ever since then it’s kind of grown,” Christopher told The Echo.

“I get out to do a litter pick every week and every time I’ll fill an 80-litre bin bag full of rubbish.

“Every person can help, picking up litter in your area may be a small step, but it can still help.”

Christopher believes that more litter bins are needed across his community and that the council should also make their official refuge bags available for people collecting litter.

The Echo put Christopher’s suggestion for additional litter bins in the Bohernabreena area to South Dublin County Council, but a reply was not received in time for print.

Alongside doing their own litter-picks, Chris-topher and his mam Mary this week supported a group clean-up in the Glenasmole Valley – which was organised to remove a large volume of illegal dumping that appeared over the weekend.

“We found batteries dumped, which are dangerous, and Styrofoam that had all broken up and the little balls were blowing everywhere in the wind – and there’s a stream there.

“There are fish going down the stream and the amount of glass bottles we also found in the stream is incredibly selfish . . . there’s a bottle bank about 15 minutes down the road.”

Christopher was among a number of people who reported illegal dumping in the Glenasmole Valley over the weekend to local councillor Alan Edge (Independent).

“One report came from nine-year-old Christopher Collins and his mum,” Cllr Edge told The Echo.

“They’re regularly in touch with me to report dumping as they go on their local litter-picks.  Chris-topher really is a great ambassador for the environment and an inspiration to us all.

“It gives you hope for the future.”

Cllr Edge added: “Having inspected the worst-affected area myself and seen a stream at the top of Cunard Road choked full of foul-smelling domestic waste from bags which had by then burst, I put a post on social media.

“I was amazed by the response.

“Just as the monstrous behaviour of the people who pollute this lovely countryside shakes your faith in humanity, the kindness of the volunteers willing to give up their free time at short notice to clean up after them is inspiring.

“Veteran litter-pickers John Kiberd, Caragh Coote and Wladek Gaj offered their services at once, as did Donie Anderson (and dog Jess) – who carried on cleaning up well into the evening – Martin Dunne, and Christopher Collins and his mum, Mary.

“Pure [Project] were wonderful and arranged for the collected rubbish to be removed.

“We cleared the stream and then carried on cleaning a particularly bad area of dumping on the eastern side of the valley from which eight tyres were pulled.”

NEWER POSTCoronavirus: One further death and 85 new cases
OLDER POSTAmazon set to create 1,000 jobs over the next two years