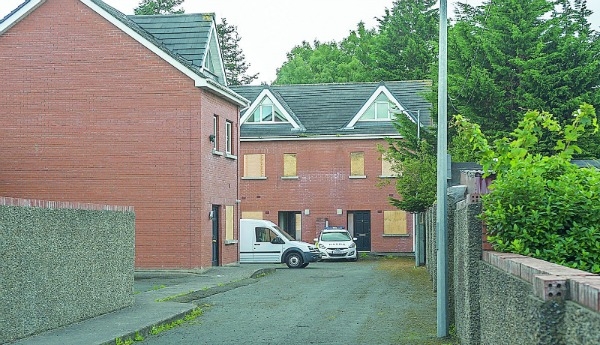 A 47-year-old man found dead in the back garden of a vacant property fell from a Velux window on the roof, an inquest heard.

His body was discovered behind a terrace of vacant houses at Station Grove, off Station Road in Clondalkin on August 31 2015. The Velux window was located in a bathroom in the attic space of a two-storey house.

The houses were built in the last ten years and were complete, but the terrace, originally planned to contain more properties, was unfinished, Dublin Coroner’s Court heard.

The discovery followed a spate of robberies and vandalism at the estate, the court heard. The man sustained a diffuse brain injury and multiple fractures to his ribs, upper right arm and wrist as a result of the fall.

Investigating gardai believe the man may have been ‘spooked’ and attempted to climb onto the roof to avoid detection.

Garda Kieran O’Dwyer said it was possible to stand on the cistern in the attic bathroom to climb out the Velux window.

“It’s believed he climbed out through the skylight of number seven,” Garda O’Dwyer said. The Velux window at the neighbouring house was smashed, the court heard.

“I can only surmise he was in the property for the reason of taking items, he heard some noise that lead him to believe he’d been detected in the property,” Garda O’Dwyer told the court.

Phillip Daly was with caretaker Andrew Rowe boarding up windows following reports of ‘loud banging’ from the property when the body was found.

“There was a lot of vandalism going on, kids smashing windows and things,” Mr Daly said. The previous week, he said he’d seen Mr Geraghty at Number 2 Station Grove.

“He fell over the door and onto the ground. He walked off towards the garage. I rang the guards. It was the same guy, 100 per cent,” Mr Daly said.

Mr Rowe, who works for LT Construction, said there had been a number of break-ins.

“I’d got a call about a lot of noise at the house and one stage a lot of loud banging,” Mr Rowe said. He was checking around the property when he saw the man’s body.

The body was surrounded by tools, Garda O’Dwyer told the court.

The man died due to head, chest and limb trauma consistent with a fall from a height while intoxicated on a mix of anti-depressant and anti-anxiety medications and methadone.

The combination of drugs affected his coordination and made him more likely to lose his balance and fall, Coroner Dr Myra Cullinane said, returning a misadventure verdict. Mr Rowe told the court that the houses are no longer boarded up and are now for sale.