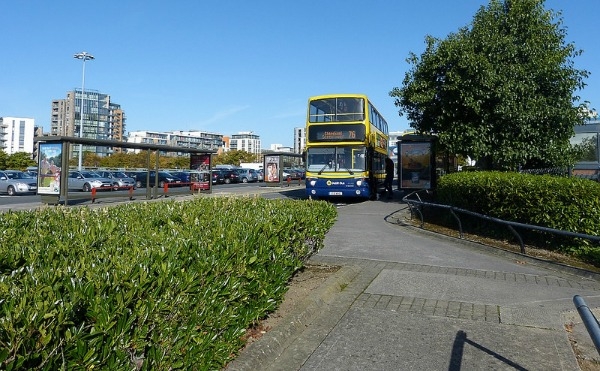 A Clondalkin mother has this week thanked members of the public and a council worker after they helped recover her handbag that had been snatched by a thief at a bus stop in Tallaght.

On Monday afternoon Brid Flood was waiting for the number 76 bus at the terminus stop at The Square when a man grabbed her bag and ran towards Sean Walsh Park.

“I normally keep hold of my bag but I let my guard down,” said the mother, who only had enough money for her bus journey home to Clondalkin where she was collecting her children from school.

She continued: “I left the bag beside me and started writing in my diary. A man walked by with a black hoody on. The hood was large enough to hide his face. He grabbed the bag and ran. I dropped my diary and ran after him.”

The robber made his way towards Sean Walsh Park via the Tallaght Bypass bridge, where Mrs Flood called out to a passer-by who came to her assistance.

Once in the park another member of the public had joined the chase, and when they reached the wooded area a council worker emptying the bins also began searching for the thief.

She said: “We asked the worker if he had seen a guy running with a green bag.

“The bag was easy to identify because it has a print of a painting that I did myself. Only one other person has a bag with the same design.

“The guy that was still helping me saw the thief across the road strolling away, calm as you like, so he gave chase and I ran too.

“The bin man hopped into the waste collection vehicle and drove after the thief too. We all ran.

“The passer-by screamed “put the bag down” over and over and the thief dropped the bag and ran into another section of woods.

“If I wasn’t for those three guys I would have lost it all.

“I would have been too broke to get the bus home to Clondalkin to collect my children from school.

“I am so grateful. If it had been just me chasing him he would have got away with the bag.”

Mrs Flood told the Echo that she rang Tallaght Garda Station after the incident and that she is hopeful that by highlighting the crime others will be more cautious in the area.

A Garda spokesman has encouraged anyone involved in an attempted bag snatch or who has any belongings stolen to always report it to their local station.