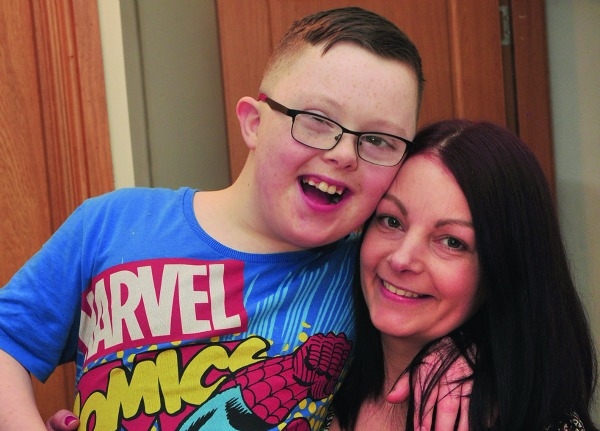 Community rallies to support boy who got school suspension

THE Ballyfermot community have rallied to support a young Down’s syndrome boy who has been suspended from his special needs school – in an attempt to raise funds for speech and occupational therapy services.

Marc Mullen (11) has been out of school since before December, and was suspended by Stewarts Hospital on February 5 – relating to behavioural issues.

His mother Emer Mullen took to social media after getting “nowhere” with the school authorities and has been “blown away by the support” she has received online.

Emer, a Gurteen Avenue resident said: “We received a letter of suspension without any meeting with the school. Nobody will take my complaint. The Department of Education say it’s the school’s responsibility. Nobody is listening.

“I did the Facebook video to prove to everyone that this is happening. In September, I usually talk to Marc’s teacher about how to manage him, as he’ll try to walk over you, but that didn’t happen this year.

She continued: “I don’t like their method of discipline. If Marc has a tantrum at home, we can defuse the situation, but refusing him school isn’t going to help. Mark need socialising.”

“They eventually sent his incident report by taxi to the house. They are labeling him as needing psychiatric help. If I thought, as a mother that he needed that type of help, I would have got it a long time ago.

Emer feels a lack of communication with school officials has exacerbated the situation.

“Marc got on so well in school, loved his teachers,” said Emer.

“At the moment we bring his swimming, to the library, keep him motivated. He doesn’t get to stay at home.”

Emer’s online appeal generated significant support in the community – with residents and businesses involved in a fundraising campaign to secure occupational therapy services for Mark.

A Fundraising for Marc event is scheduled to take place in the Ballyfermot Sports and Social Club on April 23.

Stewarts Hospital did not reply to The Echo at the time of going to print.