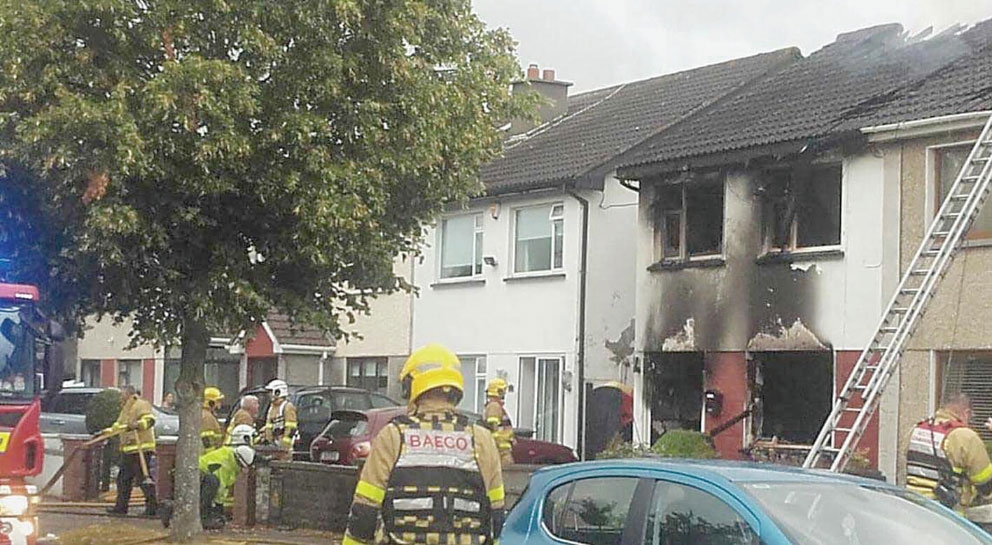 Community rally round after home is destroyed

OVER €4,000 was raised at an event in Aherne’s on Friday night for a family whose house was destroyed in a fire last July, which it is hoped will help the family to “start to build up their lives again”.

Deirdre Byrne, Bren Murray, their two daughters aged 21 and 14, and their two-year-old grandson, saw their house on Heatherview Lawn in Aylesbury go up in flames, just after 6am on July 27, with gardai treating the fire as an arson attack.

Emergency services at the scene of the house fire last July

The community rallied around the family, with a Go Fund Me campaign set up by the community raising over €6,000 to help cover the cost of the house being rebuilt.

Local resident Mary Hoey organised a fundraising night for the family in Ahernes on Friday, where a raffle was held with spot prizes that were donated by local businesses, and a number of men also got their beards shaved to raise funds for the family.

Ms Hoey commended the generosity of the people at the event, saying that a woman who won a €500 voucher for Right Style Furniture then gave it to Deirdre and Bren for their new house.

Ms Hoey said: “The event was jampacked. There was a good crowd – everything went well on the night.”

Deirdre’s sister, Siobhan Schunk, who lives next door to Deirdre in Aylesbury, told The Echo: “We can’t believe how good the people of Aylesbury have been – we’re humbled by their support.

“People are just so good. Deirdre and her family are overwhelmed with the support.”

Construction work is ongoing on the new house, which is being built on the site of the family’s former house, and the house is beginning to take shape with the family hoping to move in before Christmas.

Ms Schunk added: “Now they can start to build up their lives again.”