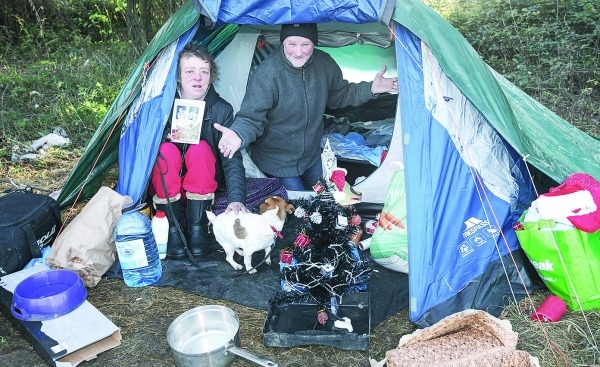 Community rally to give homeless couple five days in a hotel

A HOMELESS couple was given the gift of “feeling human” this Christmas, after the community rallied around and paid for them to spend five days over the festive period in a hotel.

Sabrina Arbuthnot and Joe Kinsella, who live in a tent in a South Dublin park, featured in The Echo last month after it emerged that the couple, originally from Ballyfermot, had cared for a missing dog from Tallaght called Mojo.

The tiny tan-coloured Chihuahua went missing from his Rossfield home in early November and was picked up by two boys who sold him to Sabrina and Joe – who cared for Mojo until they reunited him with his owner, ten-year-old Sean Matthews, who, having autism, was devastated by his pet’s disappearance.

After posting the story of Mojo’s return on Facebook, there was an outpouring of support for the homeless couple – which resulted in Sean’s mam Tara creating a gofundme page in aid of Sabrina and Joe.

The original fundraising goal set by Tara was €500, however €1,700 was donated by members of the public – and used to place Sabrina and Joe in a hotel from December 23 to December 27.

Tara, who minded Sabrina and Joe’s dog Cindy while they were staying in the hotel, told The Echo: “Sabrina and Joe have nothing yet they fed Mojo and kept him warm, we can’t thank them enough.

“Alongside putting them up, the money was used to buy them new clothes and I brought them to JADD in Jobstown where they had a shower, a make-over and a lovely breakfast before going to the hotel.

“It was amazing, they looked a million dollars… and felt it.”

She added: “We also put a Christmas tree up in their hotel room and Christmas stockings, and bought them a new tent, camping bed, sleeping bags and toiletries.”

Homeless since she was 16, Sabrina, now 39, told The Echo: “I’ll never forget this Christmas, and thanks to everybody who donated from me, Joe and Cindy – we are so grateful.

“Christmas in the hotel was absolutely brilliant, it was fantastic… even getting to watch a bit of telly was amazing.

“We’ll never forget everybody’s kindness and while it was hard coming back out onto the streets after the hotel, we have amazing memories.

“The five-day break really gave us a boost… and we felt human again and respected.”

Sabrina and Joe in the hotel

Sabrina and Joe have stayed in hostels over the years but feel safer and more secure living in a tent, away from the city centre.

“Living in a tent can be hard…like when we have rats coming in or when it rains or is really cold.

“We also try though to stay away from where people would be passing through, it can be quite frightening if somebody walks past the tent at night.

“However, it can be comfortable some nights and we feel safer and more secure in a tent – the hostels can be bad environments, there’s a lot of drug use.”

Sabrina, who has diabetes, added: “We’re trying to help ourselves to get a little flat or something but there’s not much support out there for couples like me and Joe, more needs to be done.

“You talk about Santa and the miracle of Christmas, well staying in that hotel was a miracle for us… and it also gave us a wake call that we need to get somewhere to live.

“Hopefully in 2017 we can get ourselves sorted with a flat.”

Tara told The Echo that she is linking Joe and Sabrina in with services that may be able to help, support and advise them on securing accommodation.

Sabrina wished to thank JADD and Focus Ireland Tallaght for their support.