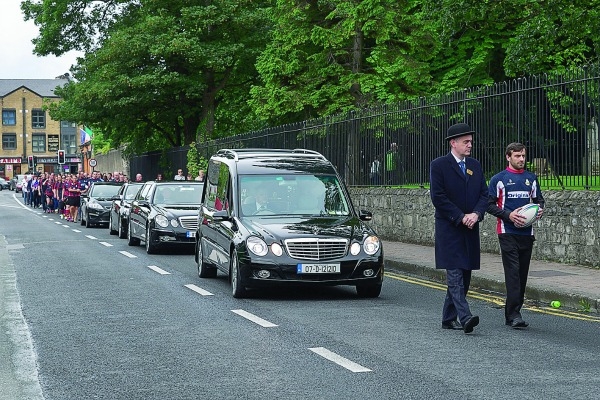 Community unites to remember Tallaght Person of the Year Philip

AFTER hundreds of people remembered and celebrated the life of Philip Preston at his funeral on Saturday, his parents spoke to The Echo about the immense kindness shown to the family by their neighbours and the wider Tallaght community.

Last Wednesday, July 6, Tallaght came to a standstill as news of Philip Preston’s passing filtered through the community, with many left in shock over the loss of the enthusiastic Tallaght Person of the Year and Tallaght Rugby Club youth development officer.

Growing up in Jobstown, Philip (37) passed away from a suspected heart attack in the early hours of July 6 – with people sharing stories, photographs and videos of Philip on social media since, many of which show his trademark sense of humour.
Last Saturday, hundreds of mourners filled St Mary’s Priory for Philip’s funeral, with hundreds also filling the steps and gardens of the Tallaght Village church.

People from across all walks of Tallaght life gathered to remember and celebrate Philip, who had strong connections to a number of local organisations, including Tallaght Rugby Club, Citywise education project and Tallaght Community Council (TCC) – which crowned him Tallaght Person of the Year last November.

On Saturday, sports clubs, community groups, volunteers, cross-party politicians, residents, young and old, and Philip’s family and friends all stood shoulder to shoulder, a clear indication of the impact Philip had on community life and his ability to break down barriers and unite.

A guard of honour was also held for the 37-year-old father of one, whose daughter Kayleigh and brothers Cody and Sean also took to the altar to talk about Philip and to thank the community for its support.

Speaking to The Echo in the days after the funeral, Philip’s parents Philip and Rita spoke of the support the whole family has received from the community, which has included kind words, prayers, dinners dropped on doorsteps and sandwiches.

“However, our pain has been made bearable by the response of our neighbours and friends and all of the acts of kindness shown by the wider community and the guards of honour [at his funeral].

“Philip was so proud of his Jobstown and Tallaght roots and he promoted the 99 per cent good members of our society and didn’t believe in class barriers.

“He accepted the Tallaght Person of the Year award on behalf of the thousands of ordinary people who do free community work of all kinds every day.

“It is going to be very hard to live without him.”