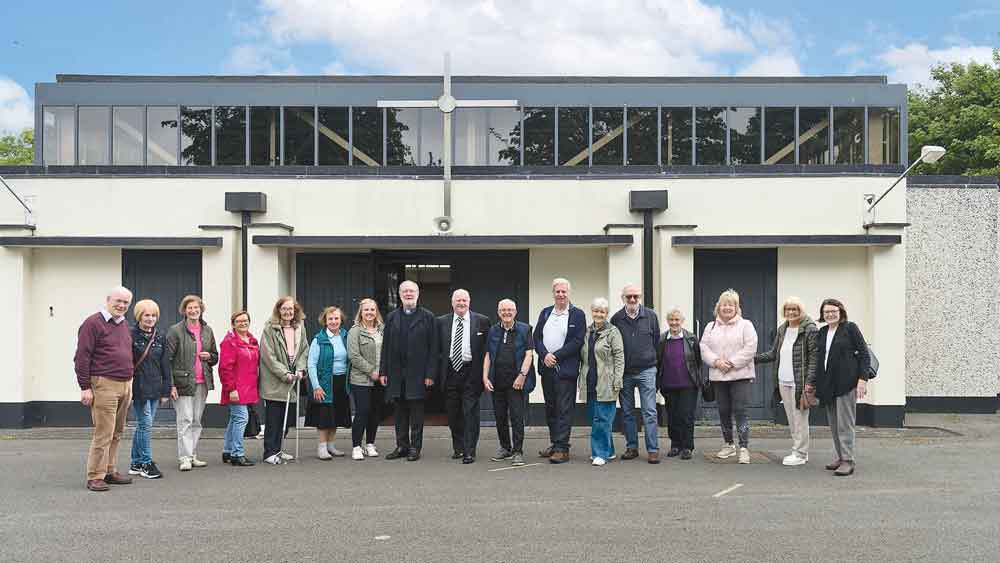 THE 40th anniversary of St Kilian’s Church in Kingswood is being marked with a series of events this weekend, including a trip to the birthplace of St Kilian, Mullagh, County Cavan.

Other plans to mark the occasion include an exhibition detailing the history of the church, and a Mass of Thanksgiving with Archbishop Dermot Farrell.

Among the many parishioners who are excited to take part in the celebrations is Dunmore resident Betty Fitzpatrick, who moved to the area in 1980.

Ms Fitzpatrick clearly remembers seeing the concrete being poured when construction began on the church in 1982, which she spotted one morning when she was on her way to work as a nurse.

“I was going out to work the morning they poured the concrete for the foundations of the church,” Ms Fitzpatrick told The Echo.

“It was a beautiful morning. I remember the birds were singing.

“Everybody was delighted about the church being built, because a lot of young married couples were moving in, so they could have their children baptised and have Communions and Confirmations in the church.”

The church was a key part of the development of the area which, according to Ms Fitzpatrick, didn’t even have footpaths when she moved in and there were no shops in the immediate vicinity.

“There were no shops and no church, just a junior school and a community centre,” she recalled. Parishioner Tom Lillis gathered information on the history of St Kilian’s Church in preparation for the celebrations this weekend.

During the course of his research, Mr Lillis found that the site of the church was originally planned for Sylvan Close.

However, the then-administrator of the parish, Fr Patrick Mulvey, felt the site was unsuitable as it was opposite to where the main community shops were to be built.

Instead, Fr Mulvey negotiated a land swap with the developer behind Kingswood Heights, Sylvan Homes, and secured the site where the church has been located for the past 40 years.

The church became a focal point of the community when it opened in 1982, with the first Mass in the new church being celebrated by Archbishop Dermot Ryan.

Ms Fitzpatrick, who attends Mass in St Kilian’s Church several times a week and is a Minister of the Eucharist and part of the church’s funeral team, is proud of the impact St Kilian’s has had over the years.

“I think it’s a great asset to the community,” she explained. “When the church was built, they held a beautiful ceremony, and the parish has come on in leaps and bounds since then.”

The upcoming celebrations have been organised by the church’s current administrator, Fr Michael Murphy, and faith development worker Natalie Doherty.

On Friday, May 20, parishioners will be brought on a trip to the birthplace of St Kilian, Mullagh in Cavan, where they will also visit a heritage centre in the town.

On Saturday, May 21, an exhibition will be held in St Kilian’s detailing the history of the church, while on Sunday, May 22 at 11am, a Mass of Thanksgiving will be celebrated by Archbishop Dermot Farrell.

“I think it’s very important for us to celebrate the 40th anniversary of St Kilian’s,” said Ms Fitzpatrick, “especially for those of us who’ve lived in the parish for such a long time and can remember a time when we had no church.”