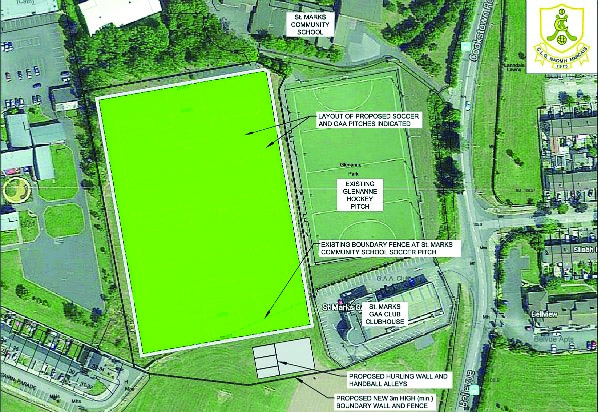 CONCERNS have been raised within the community of Springfield as the development of an all-weather pitch for St Mark’s GAA Club and community school has been given a set-back, due to a delay from the Department of Education and Skills (DES).

Despite preparations being completed and funding for the project being made available, work has been unable to begin as the club and school await consent to build on land owned by the DES.

A meeting was held with members of St Marks GAA Club to find a resolution to the delay, with a petition expected to be created in the near future.

Paul Burke, development administrator of St Mark’s Pitch Development told The Echo: “We are being held up at the Department of Education and Skills.

“South Dublin County Council have granted us a conditional license to get the boundary wall up on their lands but there is a portion of the wall which is in McGee Park on lands under the Department control.

“The boundary wall will actually make more secure the DES lands and allow us to prepare a section of grassed area for our teams to train on when the council pitches are off due to bad weather.”

As previously reported in The Echo, the development will see a full size all- weather pitch built on lands currently owned by St Mark’s Community School through the Department of Education.

The plans have been in the pipeline for over a decade, and were originally granted permission back in December 2008, with an extension of that permission granted to the club in March 2014 for a further five years.

Paul continued: “We have contacted Roadstone who are kindly donating all of the blocks for the wall and we have funding to get the boundary wall and railings erected.

“This is a community facility which will not only benefit the GAA club but will provide first class training and playing facilities for the community as a whole.”