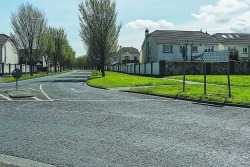 Council to install ramps at accident blackspot in Foxborough Downs

COUNCILLORS in Lucan who lobbied for traffic calming measures to address an “accident blackspot” in Foxborough Downs, have welcomed a decision by South Dublin County Council to invest in speed ramps for the road.

People Before Profit Councillor Ruth Nolan, who lobbied for the implementation of ramps in Foxborough Downs, says one particular corner is such a hazard, that it has caused six accidents and three pedestrian knockdowns.
Cllr Nolan said: “It has been ignored since 2008. Builders left a bad angle that has resulted in six serious accidents and three knockdowns. It is only a matter of time before someone is killed.

“Residents brought it to my attention after I was elected last June, and I collected a petition.
“When the council announced their Budget for roads this year, Foxborough Road was included but not Foxborough Downs. After lobbying by myself, the council have decided to put ramps into both. I received confirmation from the council this week, and the works have gone out to tender.”
South Dublin County Council will install ramps at Foxborough Road, Foxborough Downs, Fforster Grove, Drive, Green and Oldbridge.
Independent Councillor Paul Gogarty expressed dissapointment that Foxborough Downs had been initially overlooked after it was “specifically requested by Cllr Nolan, and supported by councillors.”
Cllr Gogarty called on residents associations to “notify us of specific blackspots for next year.”