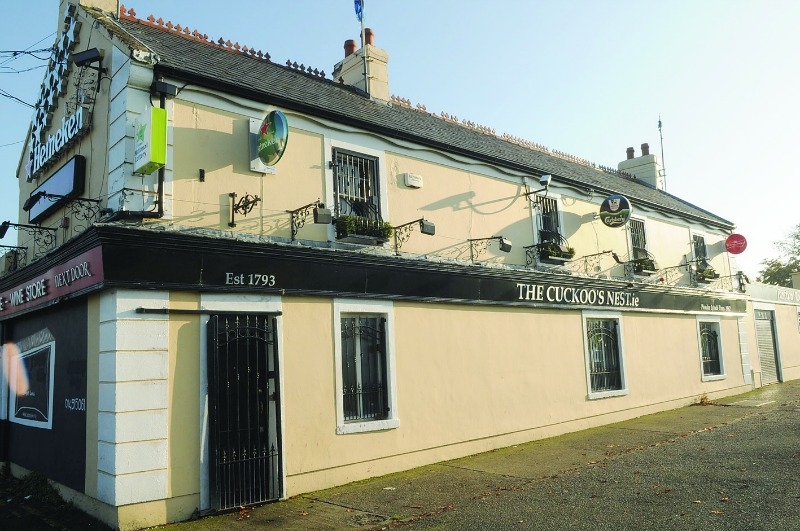 Cuckoo’s Nest: “We don’t want to be pre-empting anything just yet, but we are looking forward”

PLANNING permission for a residential development to the rear of the Cuckoo’s Nest has been passed by South Dublin County Council, subject to 27 planning conditions – which includes the local authority being paid nearly €515,000 in developer fees.

Following the closure of the Greenhills Road pub in May 2015 due to spiralling debts, a significant planning application for changes to the Cuckoo’s Nest and for the development of a 45-unit residential estate on land to the rear of the pub was lodged with South Dublin County Council.

Over recent months, the council sought additional information and clarification on a number of items contained in the planning application, a lengthy process which left locals wondering if the Lynch’s would ever get home to roost in the family pub.

However, last Thursday, January 5, county planners granted permission for the development, which will see money made from the sale of the land, complete with planning permission, being used to pay off the banks – facilitating the opening of the pub.

Speaking with The Echo this week, Bernard Lynch, whose parents Phyllis and the late Peadar bought the pub in the early sixties, was remaining measured in his response to the planning permission.

He told The Echo: “We are very pleased that the council granted planning permission, but we now have to go through the conditions at our end to make sure that there are no surprises in there.

“We also have to be mindful that there is a four-week appeal process, so we don’t want to be pre-empting anything just yet, but we are looking forward.”

Lodged by Phyllis Lynch, the application passed by county planners provides for 39 three-bed homes and six two-bed apartments located in a three-storey building.

The application also includes plans to renovate the pub itself and seeks to level the existing rear and side extensions, which will be replaced with a new two-storey wing that will house a bar, lounge, external courtyard with seating at ground level and a restaurant and kitchen on the first floor.

To pave the way for the development, the planning permission also provides for the demolition of Tallaght Theatre, which will be reconstructed in the north-west corner of the site.

In the council’s conditions, it states that the developer must pay a financial contribution to the council of €514,336.64 for public infrastructure and facilities that will benefit the development.

The conditions also stipulate that prior to any development a number of reports and clarifications will be required in relation to, for example, landscaping, water mains, parking management, which is to prevent residents using the car-parking spaces assigned for patrons of the pub and theatre, and a construction traffic management plan.

The council also stressed that each proposed unit shall be used and occupied as a single dwelling and cannot be sub-divided or used for any commercial use.

And, no loud music or noise is to emanate from either the pub or its smoking shelter in the interest of public health and the surrounding community.