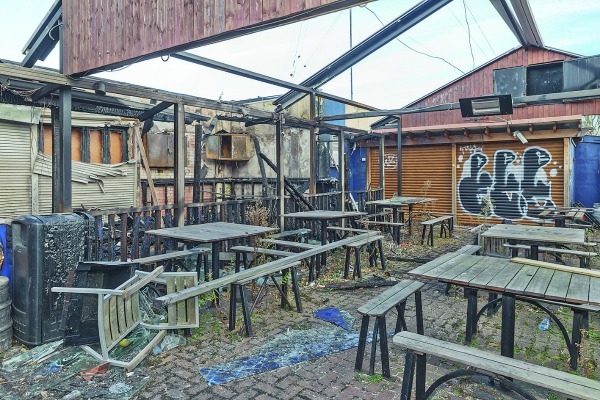 Cuckoo’s Nest: “We’re pretty confident that the council will pass the application”

A FIRE at the Cuckoo’s Nest last weekend has not burned the Lynch family’s hopes of returning to the iconic Tallaght pub, The Echo has learned.

On Sunday evening, October 16, a blaze started at the back of the building which destroyed the beer garden and caused some damage to the adjoining section of the main building.

Images of the blaze, which was quickly brought under control by four crews of Dublin Fire Brigade, circulated online, with locals expressing their support for the Lynch family – which was forced to close the pub in May 2015 due to spiralling debts.

A significant planning application for changes to the pub and for the development of a 45-unit residential estate on land to the rear of the Nest has since been lodged with South Dublin County Council – which earlier this month requested additional information on the application.

This week, Bernard Lynch spoke with The Echo and confirmed that the fire will not impact on the family’s hopes to return to the pub, which will be based on the council approving the current planning application.

Bernard said: “We’re pretty confident that the council will pass the application, there was no submissions and we’re just going through the finer details now.

“If passed, we hope that whatever kind of configuration happens that we will be part of the site going on into the future.

“The fire won’t impact on any plans going forward.

“In reality, the existing pub as it stands won’t open again.

“The days of the big pubs are over and the big lounge will be gone if the pub re-opens – we’ll be going for more of a local pub/bar feel that will cater to immediate communities and regulars.

“The front will look the same, preserving the look of the pub is very important to us – it just won’t be as big behind the front.”

He added: “We can’t thank people enough for all of the messages of support since the fire and I have to say the regulars are always great and asking how we’re getting on.

“The family really misses the day-to-day craic that we had with the regulars, and along with our mother we miss the regulars and staff.

“However, we are hoping to be back soon.”

A senior Garda source told The Echo that investigations into the blaze are currently ongoing.

The source said: “We are investigating a suspicious fire at the Cuckoo’s Nest.

“There is an indication that some sort of accelerant was used and a substance is currently being analysed.

“There is no definite line of inquiry and anybody who thinks they have information is encouraged to contact the station.”
Call Tallaght Garda Station on 6666000.