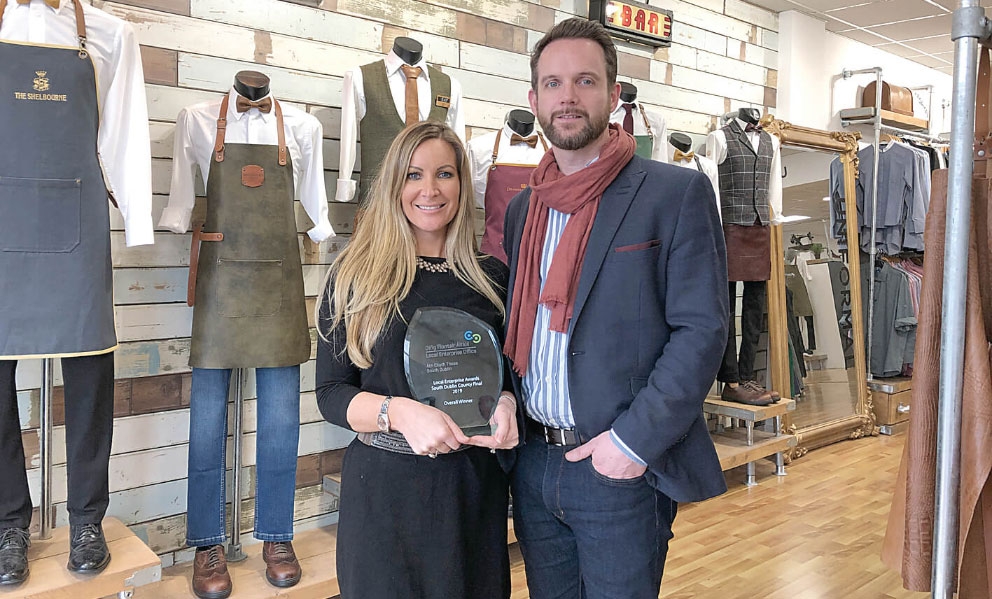 BALLYMOUNT business Uniformal recently won the South Dublin Enterprise Award, but the husband-and-wife-run company is already looking forward to further growth, both at home and abroad.

Established in 2016 by Chiara Keating and Barry McCabe, Uniformal designs and manufactures premium uniform clothing and work wear for the hospitality sector and drinks industry.

Ciara Keating and Barry McCabe, founders of Uniformal in Ballymount.

Last year, they opened a new design studio and factory in Fashion City, bringing all of its bespoke production in house – increasing turnover by 500 per cent and staff by over 600 per cent.

With Chiara from Bancroft and Barry from Old Bawn, they are one of the few local clothing manufacturing companies in Ireland, and a local success story.

After winning the regional award, Uniformal will now represent the LEO south Dublin Office at the National Enterprise Awards on May 29.

“We got a lot of support from the LEO by way of employment grants and a business employment scheme that allowed us to expand into an adjoining 15,000 sq ft premises in Fashion City,” said Barry.

“This includes a design studio and factory, which is significant as we were outsourcing that, and as a result our staff numbers have increased.

“In Ballymount, we design and manufacture our own range of premium hospitality uniforms and canvasses and leather aprons.

Growth at the business has been so good in the last couple of years, that they are effectively outgrowing the LEO, and plan to set up a British presence, which could prove invaluable post-Brexit.

“We are in the process of opening an office and showroom in London this year,” said Barry.

The company already has a number of distributors in London,

The premises will provide an important link for their established network of distributors and re-sellers across the UK and Europe.