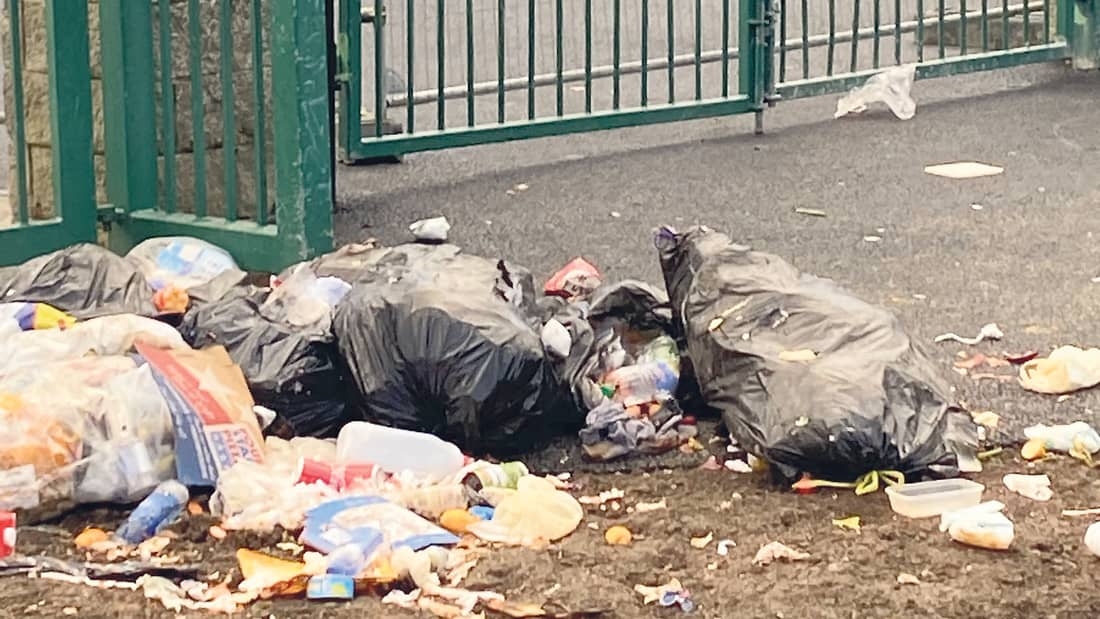 A LOCAL resident was “disgusted” to find a sizable quantity of illegally dumped waste at the new entrance to Bancroft Park in Tallaght last week.

Leo Oman was walking his dogs on Sunday morning when he spotted the waste at a site, near the new Castletymon Library, that was in process of being prepared for seeding.

The rubbish dumped at the entrance to the park

Mr Oman told The Echo: “They dumped their rubbish all over the fence. I was disgusted when I saw it.

“It’s a community facility that was being cleaned up for the new library, and it was destroyed by this.

“[The dumped waste] can attract rats and birds. I don’t blame the council for this – this is the community’s responsibility.

“If I give my rubbish to some guy in a van, then he’s going to dump it in places like this.

“There’s no civic spirit in it.”

Illegal dumping at this site is an infrequent occurrence, according to Mr Oman, but issues with illegal dumping around the county have increased in recent months.

South Dublin County Council previously stated that despite the maintenance of waste collection services throughout the county during the lockdown, there was

“a sizeable increase of illegal dumping and the burning of waste” in the county.

The local authority added that litter wardens and public realm crews had increased their patrols in a bid to tackle issues with illegal waste, and they stated that waste enforcement officers had been carrying out ongoing surveillance of litter pollution black spots.

A spokesperson for the council told The Echo: “The waste which was illegally dumped at the new entrance to Bancroft Park was removed by a South Dublin County Council Public Realm crew [On Monday, October 12].

“No evidence linking the waste to any individual was found.

“As always, the council is grateful for assistance and support from residents or others in their investigations of illegal dumping incidents as they arise.

“In the absence of substantive evidence/witness statements and the presence of such witnesses in court it is not possible for us to bring successful prosecutions.

“Incidents detected or reported are investigated and where evidence is found appropriate enforcement action is taken.”